Shirasaki, a Wisconsin public defender, was recognized for her impact on her practice area and service to the State Bar of Wisconsin and to the community. Fluent in Spanish as well as English and Portuguese, Shirasaki worked as a lawyer at the Immigrant Justice Clinic at the UW Law School, a “dream job” that allowed her to provide free legal services to Wisconsin’s underserved immigrant community. 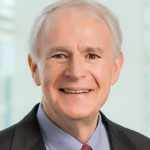 Thomas Barrett, who has served as the mayor of Milwaukee since 2004, was nominated by the Biden Administration to serve as an Ambassador to Luxembourg. Luxembourg, a western European nation with a population of approximately 620,000 people, is slightly larger than Milwaukee, and is between France and Germany. Barrett’s new position is subject to U.S. Senate confirmation.

Kelliann Blazek ’14 was tapped to join the Biden Administration as a special assistant to the president for agriculture and rural policy. A Wisconsin native, Blazek spent several years working on agricultural and rural legislation at the U.S. Capitol before returning to Wisconsin, where she became director of the Wisconsin Economic Development Corporations Office of Rural Prosperity. She previously worked as counsel to U.S. Representative Chellie Pingree and helped include provisions in the 2018 farm bill to support local food economics and organic agriculture. She taught food law and policy at George Mason University’s Antonin Scalia Law School. Blazek grew up on a small beef farm outside of Bangor in La Crosse County, which her family still runs.

Jessica Shoemaker ’04 was awarded the 2021 Carnegie Fellowship to explore rural futures. Shoemaker, a law professor at the University of Nebraska Law School, was recently named co-director of its Rural Reconciliation Project.

“Modern agriculture is highly industrialized and increasingly characterized by concentrated, absentee land ownership. Many rural places face a crisis of depopulation, political alienation, environmental decline, and racial injustice,” Shoemaker said in an interview with the University of Nebraska. “While 98 percent of farmlands are owned by people who are white, the people who work the low-wage, often dangerous agricultural sector jobs are overwhelmingly not white and more likely to live in segregated rural geographies of concentrated, persistent poverty. This project analyzes the overlooked role of property law — including our most fundamental land-tenure choices — in constructing these dynamics.”