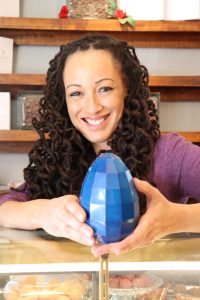 Whether in the courtroom or in her chocolate shop, Syovata Edari is finding success on her own terms.

An accomplished trial lawyer, Syovata “Vata” Edari ’01 never expected to become a full-time professional chocolatier. When she first turned to chocolate making, it was as a creative outlet from her demanding legal practice. What started as a hobby continued to grow, and soon, family, friends, and businesses were ordering her chocolates. She took the plunge and opened CocoVaa Chocolatier, a micro-batch chocolate shop in Madison, Wisconsin.

Though the business is only two years old, it is already racking up international accolades, something Edari credits to her passion for perfecting new products and flavor combinations. Artisan chocolate is a crowded market to break into, but Edari sets herself apart with intricate designs and unique flavor profiles, like Persian saffron and cardamom pear.

Edari’s legal savvy was critical to her business success. In 2016, candy giant Mars, Inc. sued Edari for trademark infringement in federal court in Virginia, arguing the CocoVaa name infringed upon their CocoaVia brand of nutritional supplements. It was the kind of David-and-Goliath court battle most new, small businesses aren’t equipped to tackle. Armed with her trial experience, Edari represented herself and prevailed.

The judge dismissed the first case for lack of jurisdiction since Edari doesn’t sell products in Virginia. Edari later filed her own lawsuit against Mars, asking a federal judge in Wisconsin to rule that CocoVaa does not infringe in any way on Mars’ CocoaVia brand. While Edari cannot discuss the details, the matter has been amicably resolved out of court, and she has retained her business name.

Why did you attend UW Law School?

“I wanted a career that could support me while also making the world a more fair and just place. Social justice has been a lifelong passion of mine. Before I started law school, I was working at the Fair Housing Council in Madison as a complaint analyst. I had to put cases together for civil rights attorneys but was making $7 an hour. I knew that to make a living wage and pursue public interest work, I needed to become a lawyer.”

“I had an unconventional experience because I was pregnant during law school and then returned to law school two weeks after giving birth. Three leaders at the Law School—Beth Kransberger, Meg Gaines, and Ruth Robarts —circled the wagons around me and made sure I succeeded and graduated with my class. I would bring my daughter to class and breastfeed her, or if she got fussy, the dean’s office would babysit. I was fortunate to have a village of strong women to support and encourage me.

“One day, Meg told me she received a complaint about me breastfeeding in class and in the student lounge. At that time, there weren’t really any private places to breastfeed, and I refused to breastfeed in the bathroom. My heart sank and I thought, ‘This is it. I have to quit law school,’ but then Meg said, ‘We told those students to get a life.’ She then spearheaded a successful mission to get a lactation room in the Law School. The room is still there, and it makes me proud to know that that’s part of my legacy. Moms shouldn’t get left behind. There’s something transformative about motherhood that ignites our sensibilities about everything, especially injustice. Lawyer moms are some of the best lawyers I know.”

What did you do after graduating from UW Law?

“I have practiced in about five federal district courts around the country including Kansas, Eastern Washington, and Idaho. Some of these places have been tough places to practice in. The challenges were not the cases, but the environments where I practiced, where they had never seen anyone that looks like me practice in those jurisdictions. Despite that, I have a unique ability to acclimate pretty quickly to different environments because I’ve always had to. I manage to do it while still being true to myself and by getting the environment to acclimate to the diversity that I bring.

“As far as my cases, for some reason I’m a magnet for complex cases and cases that present novel legal issues. For instance, as an assistant federal defender in Kansas, I defended a client in one of the biggest white-collar prosecutions in the history of the district. My client was charged under the Contraband Cigarette Trafficking Act, a rarely invoked federal statute. I was appointed three years into the case with an eight-week trial scheduled within months of my appointment. I worked nights and weekends, sifting through millions of pages of documents. What unraveled was a fascinating, complex story involving the history of tribal compacts, smoke shops on the Kansas– Oklahoma border, a small cigarette manufacturer who found a loophole in the law and used the smoke shops to capitalize on it, and confusion over Oklahoma’s convoluted cigarette taxation scheme.

“I concluded that my client hadn’t committed a crime and, in fact, did everything he could to make sure he was complying with what was understood to be the state of the law at that time. I filed a motion to dismiss based on entrapment by estoppel, an affirmative defense arguing that the government misled him into believing that his conduct was lawful. My co-counsel and I also filed a motion to dismiss for vagueness. The judge agreed with us and dismissed all counts against our clients. The government appealed, and I flew out to Washington with my co-counsel. We met with Lanny Breuer, the criminal chief at the Department of Justice at the time. We laid out our position and successfully convinced the DOJ to voluntarily dismiss the appeal. It was a great experience, especially being new to federal practice at the time. I quickly earned my stripes in Kansas after that case.”

What brought you back to Madison?

“To be honest, I moved back to Madison to pursue a relationship. I found myself going from being able to very comfortably provide for my children to relying on a person who turned out not to be the person I thought he was. He became extremely abusive after I moved here. I was living in a nightmare for a while and trying to start my law practice while I was going through all of this. I’ve since extricated myself from it completely. However, I was able to reinvent myself in the midst of all this conflict and trauma. It motivated me to put myself back where I was, but also to never have to be in that position again. It’s not something I’ve been very public with. Only close friends and family have known. However, growing my chocolate company became the key to my financial and emotional emancipation, as well as my refuge. It has now become a symbol to many people of the very same thing — freedom to dream, freedom to determine one’s destiny, and the ability to take the obstacles that come our way and transform them into launch pads for our next big success.”

“One case was really a turning point for me in my decision to pursue the chocolate arts. I was representing a client in a shaken baby case, and she asked me to be with her as her baby was taken off of life support. The baby died in our arms. She was one year old. Going through that was like nothing I ever experienced, and I dove even deeper into chocolate, as an escape.

“Chocolate is a precise science. If something goes wrong, there’s a reason. It could be the temperature or humidity, but there’s always a reason, and there’s a way to fix it. As a lawyer, I can’t undo things or put them back the way they should be. I helped that client by getting charges dismissed, but I could not bring her baby back or fix the other parts of her life that fell apart after she was charged. As a criminal lawyer, you’re living daily battle alongside your client. That can really grind you down. You need a refuge. Chocolate is mine.” 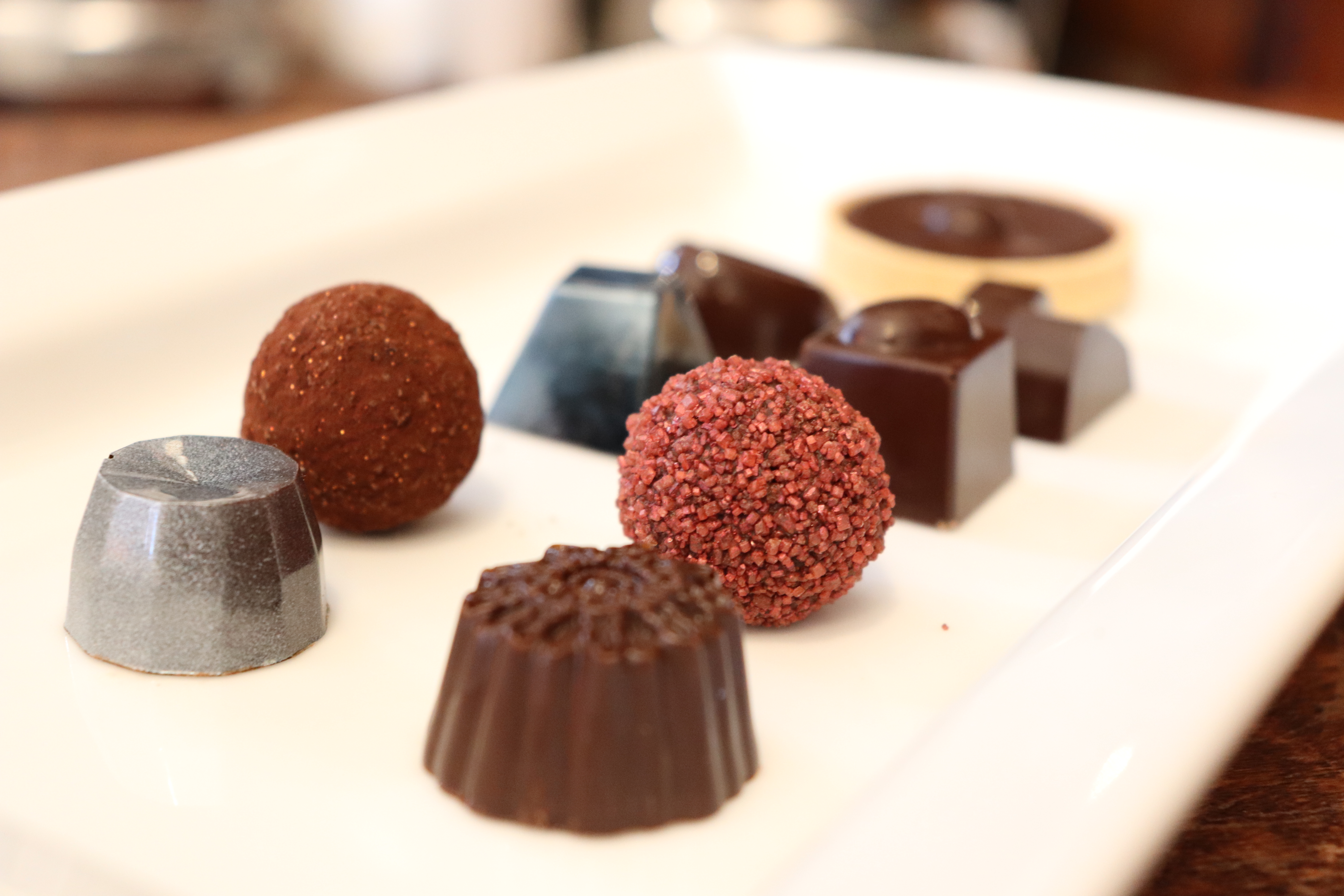 What are some of the challenges you’ve faced as a lawyer?

“Lawyers have overwhelmingly high rates of drug and alcohol abuse and depression. We get little if any sympathy from the public who think we ‘have it made,’ and we also have little empathy from our colleagues, especially in the courts. We’re held to an unrealistically high standard where we’re supposed to be infallible, our clients expect us to be magicians, and judges see us as fungible cogs in a machine that needs to crank with or without us.

“I have always been a single mom lawyer, and have sensed that some lawyers and judges think I’m irresponsible by believing I can practice law with kids and no partner. I think the legal community needs to catch up with the realities of parenting. Having a diverse body of lawyers is good for everyone, but if there is no flexibility, a lot of talented people are kept out of the practice. Ultimately, that is bad for business and bad for clients.

“I think for lawyers, this is the biggest complaint, the lack of regard for our own humanity when our very purpose is to
help people.”

What inspires your creativity?

“People think that lawyers aren’t creative, but we actually are. As a woman of color in a white-male-dominated field, I’ve always had to up my game. I spent so many years having to go above and beyond and prove myself in both of my professions. When I started CocoVaa Chocolatier, I knew that, being a trial lawyer-turned-chocolatier, I needed something that was a game changer. I pursued master chocolatier training in France and Italy to perfect my technique and base recipes, and then I put my own spin on them.

“I have a keen sense of taste and a sharp memory, which allows me to re-create an experience. That’s how I came up with my smoky Old Fashioned chocolate. I was in Zurich and got caught in a rain storm and took shelter in a bar where I tried their smoky Old Fashioned cocktail. I wanted to re-create that flavor profile in a chocolate and give customers something totally unexpected.”

“As a chocolatier, it is the auditory response to my chocolate when someone tastes it. I like to hear them go ‘mmm.’ Or when people come in to my shop and say they don’t like something—like white chocolate—and then I offer them a taste of my black sesame bar made with single-origin Colombian white chocolate, and it converts them. I love to be challenged and I love to challenge my consumers’ taste buds and win them over.

“As a trial lawyer, a not-guilty verdict is, of course, rewarding. But we don’t get those much in our field. So if I can see my clients come out of a situation better, connect them with resources, and use the system to benefit them, then that’s very rewarding to me. The last thing they need is a lawyer making them feel even more alienated in a system where they know everything is stacked against them. I’m transparent, and I keep things real.

“Running CocoVaa is a full-time commitment, but I don’t want to give up my law practice. I love going to court, I love litigating, and I have to admit, I like to compete.”