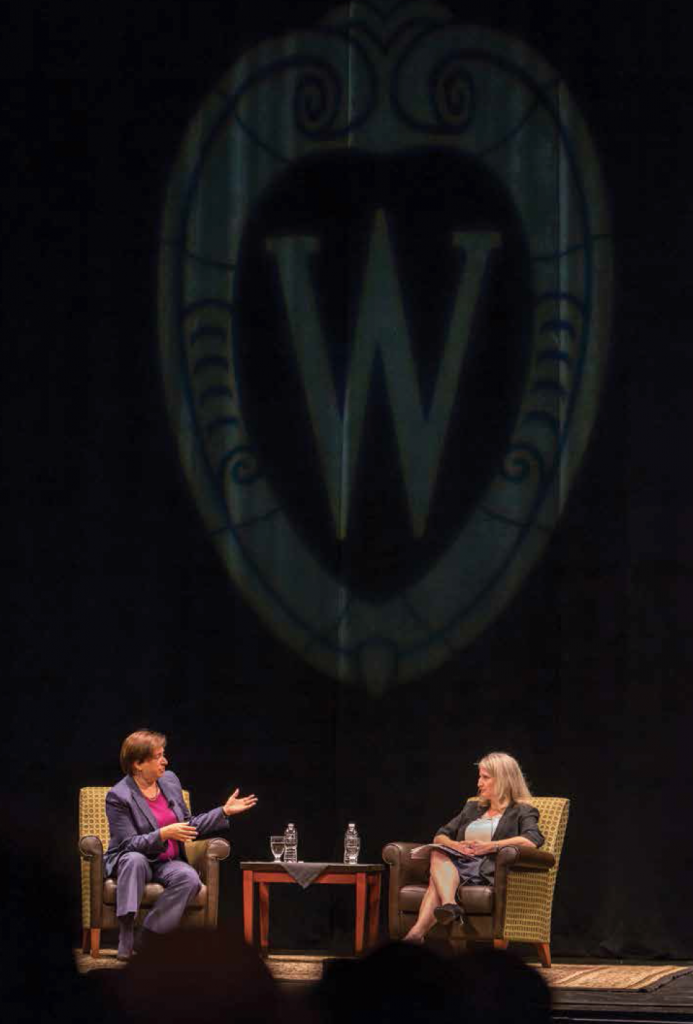 US Supreme Court Justice Elena Kagan doesn’t often get away from her work in the nation’s capital to visit university campuses, so her visit to University of Wisconsin Law School was special. In addition to speaking to students, faculty, alumni, and others at multiple events during her two-day visit in September, she strolled the farmer’s market and donned Badger gear for tailgating and a football game.

University life holds a special place in Justice Kagan’s heart: She taught law at the University of Chicago and Harvard, and then spent six years as the dean of Harvard Law School. Shortly after being named the first female solicitor general of the United States, she took her seat on the Supreme Court in 2010.

“She has my tremendous admiration for many reasons, but two stand out,” noted Dean Margaret Raymond in her introduction of Justice Kagan, whom she has known since childhood. “The first is the rich diversity of the work she has done, which makes her sort of a legal Renaissance woman. And the second is her steadfast determination, commitment, and focus. She is truly a model we can all learn from.”

Justice Kagan was the second Supreme Court justice to visit the Law School in the past two years (Sonia Sotomayor spoke in 2016).

John W. Miller ’06 came from the Milwaukee area to hear Justice Kagan speak. “During law school, you spend all this time buried in books in the library, reading court opinions and talking about the justices who wrote them, and it’s almost like they’re not real in a sense,” Miller says. “So it’s very interesting to have them sitting in front of you and speaking in plain English. It’s a really great opportunity for these students because the Supreme Court is not something you can go and watch easily, and it’s not like these justices are on Jimmy Kimmel every night.”

Miller sat next to Justice Kagan at dinner, where they chatted about everything from Justice Kagan’s time at Harvard to living in DC, and even a shared affinity for binge-watching the TV show Breaking Bad.

“It’s always interesting to look at a very public figure and try to get beyond the public persona,” Miller notes. “Even though she was dean of Harvard Law School and solicitor general and now sits on the Supreme Court, she’s really just like the rest of us, in a sense, which I find very comforting. It’s good to know that when these justices are deciding cases that affect the rest of us, they have a little bit of shared humanity.”

“It’s something I’ll take away from my law school days forever,” says Atterbury, who dreams of becoming a judge one day. “For the women at our law school especially, it means a lot to have a female Supreme Court justice come and talk. It was like one of our main superheroes came and we got to chat with her. It was inspiring.”

Here are some of the takeaways we learned from Justice Kagan’s hour-long Q&A with Dean Raymond in the Wisconsin Union Theatre.

1.She loves the honesty of the law school environment.

“It’s great to be back in an academic community where people tell you what they think. You know, there aren’t all that many people who are honest with Supreme Court justices. They don’t say, ‘That opinion you wrote, it really stunk.’

“So I go especially to faculties that I know, like Harvard and to other places as well, where I can hear a little bit about what people think about the work we’re doing. … And every year I’m struck anew by the fact that you put law students around a table, and they have all kinds of interesting things to say. At least once a day I think, ‘Good gosh, why didn’t I or any of my colleagues think about this case in just the way that person thought about this case?’

“So I love going back to law schools because I feel as though I learn things about the Court, about the job we’re doing, and I just like being in the academic environment. I think students are really energizing, and I think faculty members are smart and perceptive about some of the things that we’re doing in Washington.”

2. Her first window into the law came from her father.

“My father was a lawyer, and I knew that the law was not Perry Mason. My father was the kind of lawyer who never went to court. He actually thought it was kind of a failure to go to court because it meant that you hadn’t solved the problem by other better
means.

“And now I really understand what gave him such incredible satisfaction in the work that he did, and I also understand better than I did then the extraordinary value of that work, because he was a real problem solver. … He worked to solve people’s problems, and there is very little more valuable one can do in the legal profession or in life.”

“I went to law school for all the reasons people tell you not to go to law school. I went because I was trying to keep my options open and because I couldn’t quite think of anything better to do, and I thought of law school as a little bit of a holding action.

“But then it turned out I loved law school. I thought that the questions were fascinating and challenging. … You could see how lawyers could do things in the world, could improve communities, could better people’s lives. I knew pretty much straight away that I had landed in a good place.”

4. Listen to your mother.

“My mother was formidable, she was tough, and she was very demanding, and she was not the easiest mother because of that. But, boy, my mother’s voice is in my head all the time because she demanded things, but she taught you to demand things of yourself. My mother had this really strong belief that you could do things well or badly, and that the way to live your life, your personal relationships, your job, your school work, was with a sense of responsibility and discipline and commitment and hard work and effort. And it’s not like I always live up to those things, by any means, but I’m awfully glad that there is this voice in my head.”

“Nobody succeeds in life without other people.… I can look at every stage of my life and say, ‘Here are the people who really helped me, who helped me understand what it was to do this thing well.’ … The best thing you can do is put yourself in a position where people can give you great advice, because inevitably as you go through a career, there are going to be people around you who know much, much more than you do, and a lot of them will want you to succeed and will want to be able to mentor you and advise you. They’re actually really glad to be a mentor and an advisor and a helper. Making yourself a little bit vulnerable and asking questions is the best thing that you can do.”

6. She’s still learning on the job.

“There was no justice school. They throw you into the deep end of the pond and say, ‘Swim, why don’t you.’ … So a lot of it was trial and error my first year, and some things succeeded and some things failed, and then I would just do it differently the next time around. But by the end of the first year I had the processes pretty down pat. And then as each year goes by, you just learn more and more about more and more issues. … Your assignment is one day on some criminal case, and one day on a constitutional law case, and it’s one day on a tax case, and there is one day on an electricity regulation case, and one of the fun parts of the job is just to learn about a lot of areas of law that you didn’t know anything about to start with. Even once you basically get the hang of being a justice down, the learning curve is still high because there is just so much that you didn’t know about so many subjects.”

7. It helps to remember what it’s like to be on the other side of the bench.

“In general, arguing in front of courts is difficult, but in front of the Supreme Court, it’s pretty much a nightmare, because you have a lot of very, very active people who ask a ton of questions. I would say in a 30-minute argument, maybe 50 or 60 questions get thrown at you. It’s very rapid-fire; you have to have really thought through stuff before you get to the podium. Often the justices aren’t really asking you questions. They don’t really care about the answers you give. They’re making points to their colleagues. I say this not in a pejorative way. I think it’s actually an important part of the process that we’re talking with each other up there, but it makes it extremely hard for the lawyers who, you know, really do want
to occasionally interject some point.

“Being [solicitor general] made me realize, ‘Boy, these people have a hard job,’ and, to the extent that I remember to do so, I think it’s a good thing to…give these people a little bit of a break.”

8. There’s no one right way to argue in front of the Court.

“I was once coming back from a Circuit conference, and there were two lawyers on my flight and our flight was delayed, and we ended up hanging around and talking with each other for a long time about Supreme Court arguments. And these were two of the best lawyers that there were at the Supreme Court, but [they were] very, very different in style. One of them described it as one was a hot lawyer and one was a cold lawyer. One gets up to the podium and the place just throbs with energy. Everybody leans forward in their chairs. There is so much sort of tension and energy in the air, and then, you know, he’s just tremendous and sort of knocking everything out of the ballpark and arguing with you.

“The other is calm, cool, and collected as can be, and just sort of cools down the temperature of the room and is Mr. Reasonable Man, and surely you have to believe everything he says because he says it in such a calm kind of way, sort of slow, you know. And they’re nothing like each other, but they are both tremendous, tremendous advocates.”

“You’ve got to listen to the judges. Everybody goes up there and they wish they could repeat their brief. And it’s hard not to, right? I have these five great points that I need to be able to make. But the justices, we’re all very well prepared, we’ve all read the briefs, we know your five great points. We’re not really interested in your five great points. And the judges, they’re asking you super hard questions and they’re almost always asking you questions that are at your case’s weakest points, and there is a tremendous temptation to just try to answer that quickly and go back to what you think the strongest points are. But, in fact, what you have to do is really have the fortitude to engage the weak points and not to just sort of try to slough that off and go back to a place where you are most comfortable.

“I would say to treat it as a conversation. There is no orating at the Court; nobody has any patience for it. But if you can get up there and treat us as equals, and get into a serious conversation with us about the law and the various fine points of the case, I think people really appreciate that.” •