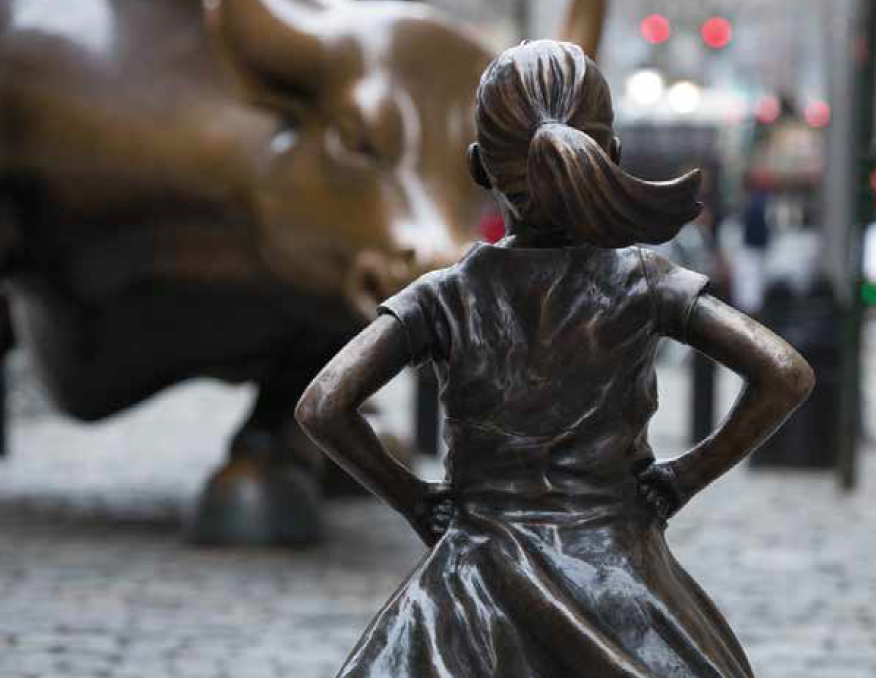 A year ago, State Street Advisors, one of the largest institutional investors in the country, commissioned the “Fearless Girl” statue as a symbol of increased attention by investors and the public to the lack of gender diversity in corporate boardrooms.

In the year since “Fearless Girl” appeared on Wall Street, the push for gender diversity in boardrooms has gained traction. State Street voted against 400 corporate boards that failed to nominate female directors, and the New York City Comptroller and the New York City Pension Funds launched their own initiative focusing on board diversity disclosure. ISS and Glass Lewis, the two largest and most influential proxy advisory firms, have announced a new focus on gender diversity. And earlier this month, Blackrock updated its voting guidelines to state that it now expects to see at least two female directors on every public company’s board.

These actions and others have made a difference. For the first time, women and minorities accounted for half of the 397 newest independent directors at S&P 500 companies, according to a new study from Spencer Stuart.

But my research shows that women on boards are still not granted equal pathways to power. Women on boards make up only 16% of corporate directors, and hundreds of companies still have no women on their boards at all.

The issue could be deeper than that. Too much of the time, the conversation about gender diversity on boards stops at the idea of hitting a “magic number”—sometimes a single woman. The focus on numbers ignores a big piece of the puzzle: Many women on boards still face real obstacles when it comes to getting a chance to make an impact.

Whether advocating for gender diversity as part of a social-cause agenda or because of the new data that shows that diversity improves the board’s work and therefore company performance, substantive equality matters. Without it, we would fall short of achieving either of these goals.

The now-infamous incident at Uber, when David Bonderman said that more women on the board means “more talking,” points to a bigger concern: Do women get a fair and equal chance to contribute?

My research paints a concerning answer. I found widespread, systematic differences between
the roles of men and women on US boards. These differences are apparent across public companies regardless of their size or industry, and the disparity can’t be explained away by the current ratio of women to men.

For example, I found that women on boards don’t serve as long as their male counterparts. In
2015, for instance, the tenure of female directors was 35% shorter than that of men. The results are more than a byproduct of recent board appointments for more women. This overall disparity has persisted over time.

Research shows that the longer a board member serves, the greater her clout in group settings. Other ingredients factor in when it comes to wielding power, but tenure on the board is a key part of the mix. Women on boards are also less likely to hold leadership roles, according to my study. Fewer women serve as chair of the board or lead independent director, and fewer of them chair important board committees. Male directors are six times more likely to serve as chairperson of the board, even after accounting for the lower number of women serving. Only twenty-seven women served as chairs of the board of S&P 1500 companies in 2015.

Shareholders should expect companies to do more than name a few more women to the board. Congress should expect the same. Companies can get started by making sure that women are not stretched too thin in their committee work, eating up their time to move into active leadership roles.

They can also promote clear opportunities for women to move up into leadership roles, so the road there isn’t uncharted territory. And companies need to make better disclosures. Not only about the number of women on the board, but also the roles they take. This transparency would give investors a better sense of whether a company is really advancing gender diversity or whether a female director is mostly a token.

There’s good news. The recent focus on board gender equity has started to move the needle. But we need to recognize the substantive and leadership gaps on boards and shift away from a micro-focus on numbers.

If women aren’t moving into positions of power on boards, we need to know why, and we need to understand the cost. •

A version of this op-ed originally appeared in the Milwaukee Journal Sentinel in March 2018.