The Young Lawyers Division of the Wisconsin State Bar honored Seep Paliwal with the outstanding young lawyer award for her commitment to serving the community. She recently launched two pro bono initiatives: the Municipal Defense Project for community members experiencing homelessness, and the Foreclosure Defense Project for those vulnerable to homelessness.

Mario Barnes has been named the next Toni Rembe Dean of the University of Washington School of Law. He is recognized nationally for his research on the legal and social implications of race and gender, primarily in the areas of employment, education, criminal, and military law. Barnes teaches courses in criminal justice, constitutional law, critical theories, and national security law. In 2015, The National Jurist magazine named him as one of twenty national leaders in furthering diversity efforts in legal education.

Pareena Supjariyavatr Srivanit was appointed dean last fall of Chulalongkorn University’s Faculty of Law. She is the Bangkok-based university’s eleventh law dean, and the first woman to hold the post. Srivanit earned her Doctor of Juridical Science (SJD)—UW Law’s most advanced degree—in 2002. She is a scholar of international trade and environmental law, and has taught criminal law, international environmental law, and international business law. She has partnered with UW Law’s East Asian Legal Studies Center to provide exchange opportunities between Chulalongkorn and UW Law faculty and students.

Read all about it

New York Magazine profiles Scott Colom ’09, a 35-year-old district attorney in Mississippi, who is trying to reduce the number of people in prison. Pamela Hart ’02 and Megan Senatori ’01 are featured in the Channel 3000 “Do Something Good” series for their work in helping victims of domestic violence by saving their pets. Aissa Olivarez ’16 discusses her work to help low-income immigrants at the Community Immigration Law Center in Madison Magazine. The Hill published an op-ed by Katherine Kaufka Walts ’04 entitled “Our immigration policies are harming children.” A clip of Paul Schmidt ’73 discussing immigration law was featured on Last Week Tonight with John Oliver.

A UW Law School diploma for the ages 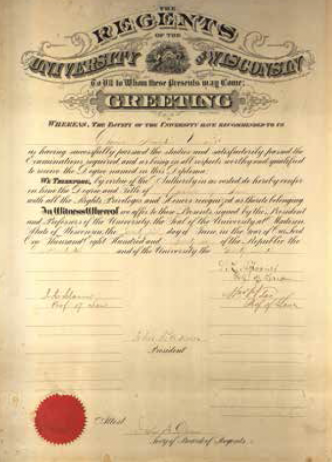 Thanks to history buff and all-around Badger enthusiast Peter Christianson ’77, UW Law School is now the proud owner of a piece of UW history: an 1876 UW Law School diploma. Christianson bid on the diploma through a Deadwood, South Dakota, auction. Included in the auction: the UW Law diploma of graduate Henry Frawley, a well known citizen, attorney, and cattle rancher. The diploma includes the original signatures of John Bascom and William F. Vilas. Christianson, in honor of the the Law School’s 150th anniversary, had the diploma restored, reframed, and protected in museum-quality glass. The diploma will be displayed prominently at the Law School. Christianson is one of five generations of Badger lawyers that includes his great-grandfather, grandfather, uncle, and son.