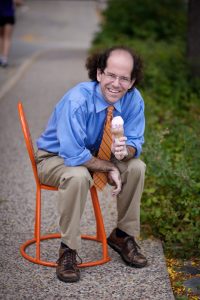 Launched in 1967, the Legal Education Opportunities Program has logged 50 years as a national model for recruiting and retaining students of color. Commonly known as LEO, the trailblazing program has graduated more than 1,500 attorneys, who actively serve their legal communities in a multitude of ways. As role models, mentors, and scholarship donors, LEO alumni also support the next generation of lawyers.

Along with LEO, Mike Hall turns 50 this year. Hall earned his law degree in 2004 and is the outgoing director of student life. He is beloved at UW Law: known, above all, for his fierce advocacy on behalf of law students, but also for his charming sense of humor, his photography skills, and his passion for doughnuts. To commemorate 50 years of LEO and 50 years of Mike Hall, we talked to Hall about his own path to law school and his love for the LEO Program, as both a student and an administrator.

Hall is an enrolled member of the White Earth Band of Ojibwe based in Minnesota, but he was born and raised in Big Sky Country. Of his early youth in Great Falls, Montana, Hall says, “I was a sickly kid who played the tuba and liked to crack jokes.”

At 15, he had surgery to remove parts of his colon and his large and small intestines, which had been damaged from Crohn’s disease. (“That’s why I liked to say I was the most gutless guy in the Law School,” he quips.)

After high school, Hall attended Montana State University in Bozeman, earning his bachelor’s degree in political science. He went on to work in a series of jobs: deejaying at local radio stations, working at a high-end camera store, and finally, taking a job as a FedEx courier. At first, he enjoyed working his scenic FedEx delivery routes—starting at Yellowstone National Park, and later serving the University of Washington campus in Seattle—but eventually, he wanted a change.

It was at Saint Cloud State University in Minnesota, where Hall completed a master’s degree in English, that he came to love higher education work. Before long, though, he saw that his chances of landing a full-time faculty job without a PhD were remote. But he liked campus life, and he remembered wanting to be a lawyer in middle school.

That’s how Hall decided to get a law degree. He applied to several schools, but after a visit to Madison, he knew UW Law was the place for him.

Hall reported to his LEO orientation in late August 2001, the week before classes started. “Like a lot of students in their first days of law school, I told myself, ‘This is a mistake. I shouldn’t be here,’” he remembers. “I figured I must have been a clerical error in the admissions process.”

But even before they began their law study, Hall and his classmates were building a community of LEO students. As orientation got under way, his self-doubt began to fade. “After hearing from Professor Bill Whitford, Assistant Dean Beth Kransberger, other faculty, and 2Ls and 3Ls, I saw how much this law school cares about inclusion.” Whitford, now an emeritus professor, was the faculty LEO adviser at the time, and Kransberger served as assistant dean for admissions and financial aid from 1998 through 2004.

Then, on the Tuesday morning of Hall’s first full week of law school, an airplane struck a Manhattan skyscraper. As news of the terror attacks on September 11 unfolded, UW students and faculty turned their attention away from academics and toward the tragedy. By noon, the Twin Towers of the World Trade Center had collapsed, and Hall went to lunch with two LEO friends to watch the ongoing television coverage.

He vividly remembers how he felt that day: “Sitting at State Street Brats amidst all the shock and confusion, it struck me how comfortable I felt with these new friends—how close I felt—even though I had only met them two weeks earlier at LEO orientation.”

Shortly after graduating, Hall got a chance to combine his interest in higher education with his legal education: in 2004, he was hired to lead UW Law’s admissions program, and in 2010, he became the school’s director of student life. 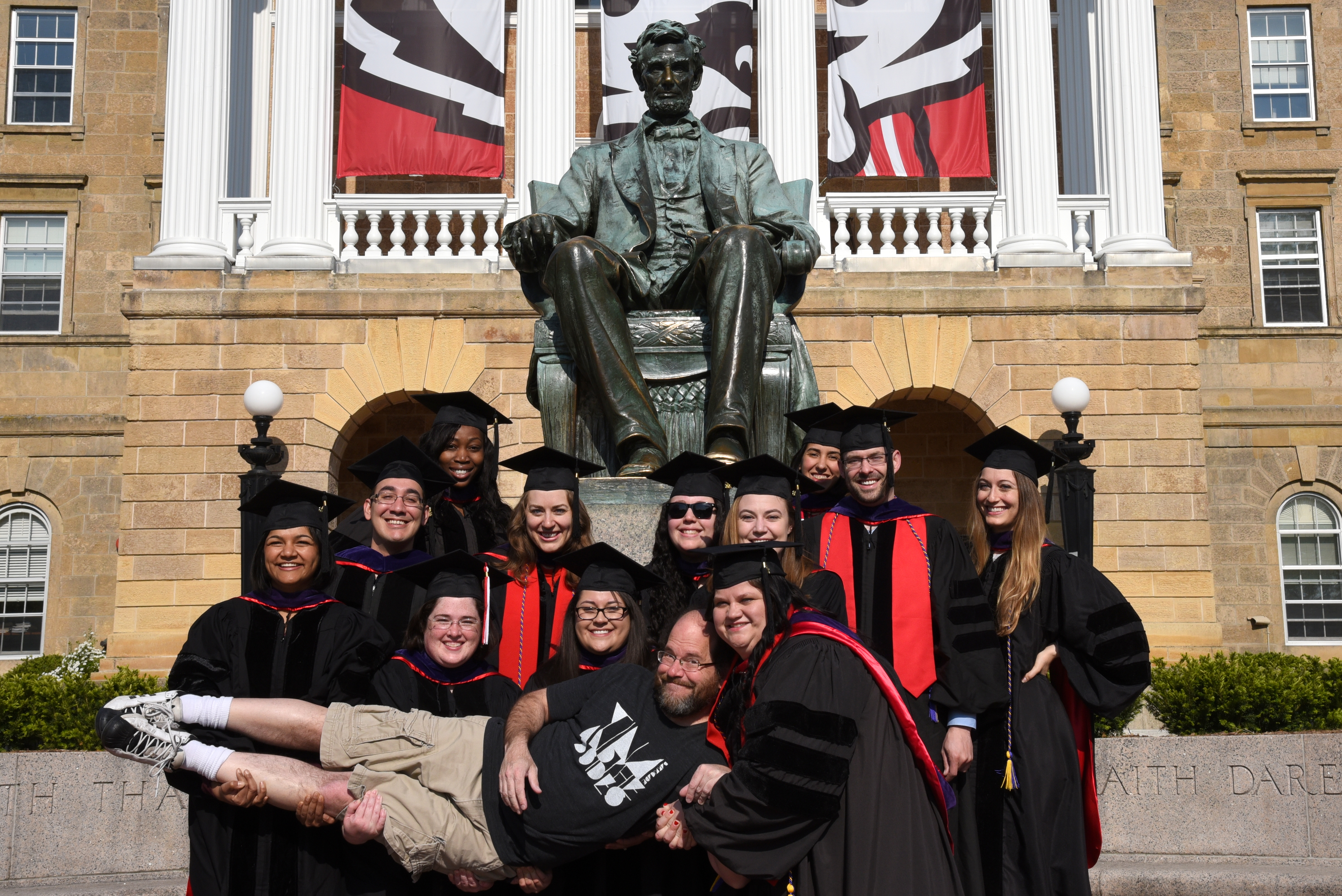 In ways that are uniquely Mike Hall, he took his responsibility to create a compassionate, healthy, and intellectually engaged student body seriously. Hall actively built community by promoting student participation in existing events, like the Dean’s Cup, the Law School’s annual fall competition with UW’s School of Medicine and Public Health. He started new traditions, too, like arranging for therapy dogs from the local nonprofit Dogs on Call to visit students before finals. For the past ten years, he handed out dozens of doughnuts to first-year law students heading into their first final of their fall and spring semesters. Hall’s love of Madison’s Greenbush doughnuts is legendary.

The year the LEO Program began was a year marked by civic struggle. In 1967, rallies against the war in Vietnam and for racial equality made UW–Madison a hub for student activism. In Milwaukee, Vel Phillips ’51 waged her legendary fight for fair housing. And in Wisconsin, Mexican-American migrant workers formed the union Obreros Unidos to protest poor working conditions on Wisconsin farms.

As LEO turns 50, the struggles remain. This past academic year, incidents of racial violence rose on campuses around the nation, including at UW–Madison. In response, more than 160 African American alumni wrote a letter to UW’s chancellor last year, expressing their frustrations with the racial climate on campus. In the hope of creating further discussion, current students created #TheRealUW hashtag to shine a light on their experiences of racism and discrimination on campus. The aftermath of a polarizing general election also left some students feeling concerned, even fearful.

Hall, who last year participated in his 16th LEO orientation, believes the program is needed now as much as ever. “We need to create a respectful community made up of students with different backgrounds, cultures, and experiences. Our students need a place of learning that’s safe and comfortable, where they do not feel they are a lone voice nor are they put in a position to be the sole speakers for their culture or experiences,” he says.

Like the LEO Program he holds dear, Hall’s legacy is large. When he announced his plans to return to his hometown in Montana, students and colleagues spent months saying goodbye. Hall received special honors at the Class of 2017 hooding ceremony; had a new student lounge named for him; and enjoyed farewell parties, tearful tributes, and doughnuts. Lots of doughnuts. 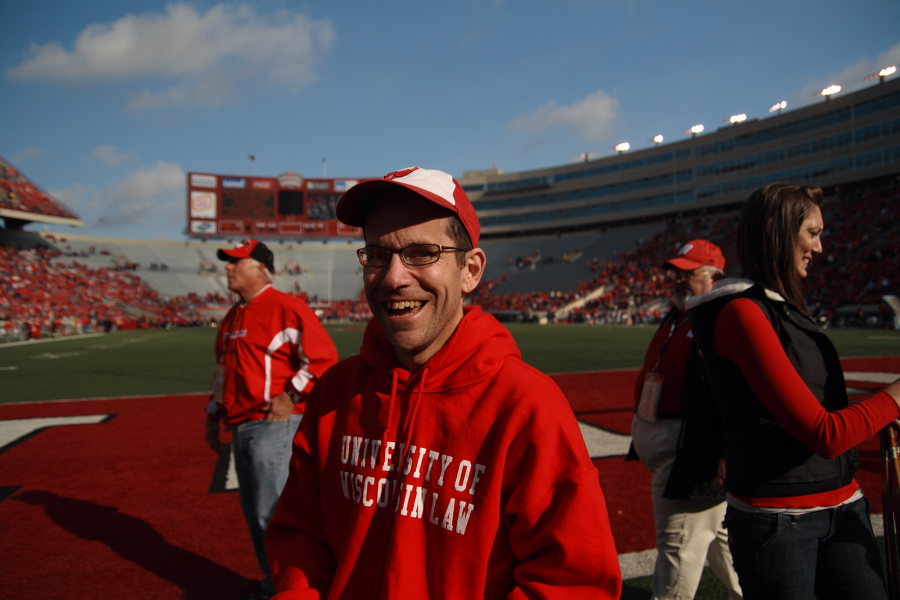 “Mike has been a voice of comfort, reason, and good sense to law students, in good times and bad,” says Dean Margaret Raymond. “I know I’m speaking for so many in our community—students, alumni, faculty, and staff—who have appreciated his steadfast friendship, advocacy, and counsel. We’ll miss him greatly.”

For Hall, the affection is mutual: “The best decision I ever made was choosing to come to UW Law School,” he says.

The Legal Education Opportunities Program owes its start to law students who led the campaign 50 years ago to recruit students from traditionally underrepresented groups to UW Law School.

In 2017, the program continues to thrive, with more than 1,500 lawyers counting themselves as LEO alumni. They serve their communities in every capacity, from government work to nonprofits and public interest law to private firms.

Much of the credit for the program’s early success belongs to one student in particular, Jim Miles ’69. As secretary-treasurer and later president of the Student Bar Association (SBA), Miles gathered information on minority recruitment programs from other leading law schools, and then drafted a Wisconsin plan. He would later spearhead efforts to raise scholarship funds and conduct recruiting trips to colleges around the country.

Miles’s work, together with law students and faculty committed to the LEO cause, won widespread praise. By 1968, the American Bar Association had named the SBA at UW Law School the best in the country, largely due to its execution of the LEO vision. 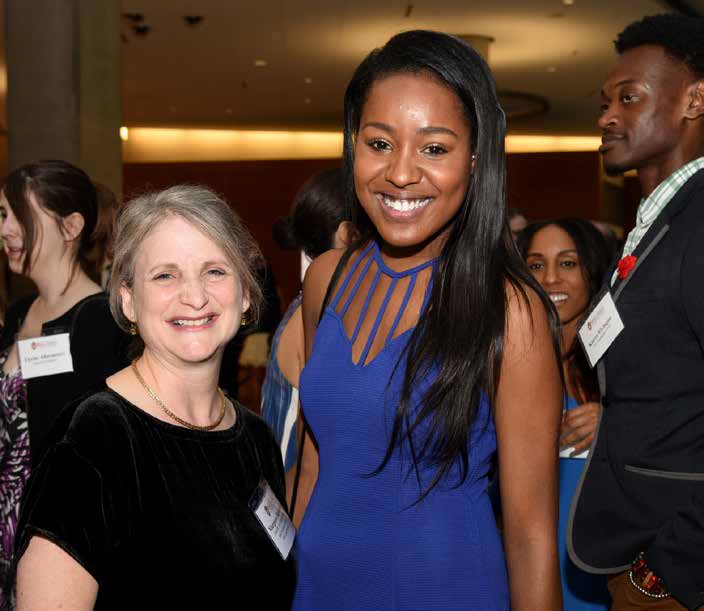 As the program’s name indicates, LEO aspires to expand opportunities for prospective lawyers, but Dean Margaret Raymond says the program also helps ensure the Law School’s well-being. “We know we’re a stronger, more sustainable law school when we include the best scholars from a multitude of backgrounds, who bring with them diversity in thought and talent.”

And ultimately, she says, LEO reaffirms the Wisconsin Idea, UW’s long-standing belief that the university should improve people’s lives beyond the boundaries of the classroom: “The health of our legal community—and our justice system as a whole—depends on trained practitioners who understand the breadth of their clients’ experiences.”