UW Law School graduate Troy Vosseller was recognized for his entrepreneurial success and commitment to encouraging the next generation of entrepreneurs.

Vosseller is the co-founder and managing director of gener8tor Madison and Milwaukee, an accelerator for high-growth startups. Gener8tor has helped launch more than 30 companies and secured millions in venture capital for Wisconsin companies. He also co-founded Sconnie, an apparel company located on State Street that he launched out of his dorm room.

Vosseller has deep ties to UW–Madison. After earning his BA, MBA, and JD from UW, he was an assistant clinical professor/supervising attorney at the Law School’s Law and Entrepreneurship Clinic.

Milwaukee County voters made history on April 4, 2017, by electing UW Law graduate Kristy Yang to the county’s Circuit Court. In an interview with NBC News, she said, “As a former refugee child, I never thought that I’d become an attorney. I went to law school with the intention of helping people, and then I realized the role I needed to be in is that of a judge.”

an immigration lawyer, was flooded with questions in the wake of President Trump’s executive order on immigration. To better connect people affected by the executive order, she created Immigrants United, a Facebook group where members can post questions and share resources. Five thousand people joined in the two days after the group’s start—a week later, the number doubled. Now over 12,000 members strong, the group’s primary goal is to get information out quickly as new laws and policies develop. 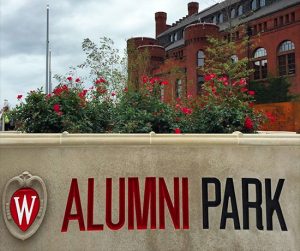 A new lakefront greenspace celebrating the Wisconsin Idea has opened this fall. Among the first alumni to be honored are two of the Law School’s own: Vel Phillips ’51 and the late Gaylord Nelson ’42. This new green space between Memorial Union and the Red Gym, hugging the shore of Lake Mendota, features more than 50 museum-like exhibits woven through gardens, plus a visitor center.