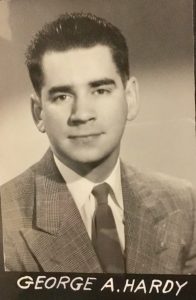 When I receive the Gargoyle I always check out the class notes, and don’t find many from the 1940s.

Regarding your article, “A Time of Principles and Protests,” I don’t know the author, but he missed me:

In 1969, on a tear gas–clouded Bascom Hill, the National Guard and combat-girded sheriffs all around, I was about to hurl a tear gas canister back in their direction (I’m confident all statutes of limitation are in effect) when my surroundings became clearer to me. I was virtually alone and it was pouring. The revolution had been rained out.

Having served a year in Vietnam as a draftee, ’67-’68 including Tet, (we called it the unwilling led by the unknowing), I started at the UW Law School in the fall of 1968. My stint with brother Vietnam soldiers from the back hills of Alabama to the slums of Puerto Rico had convinced me that not only was the war and its conduct wrong but so were many other things. In fact, I had applied for admission from “in-country” after many long sessions talking to soldiers at night. The motivation to get a law degree and serve others was implanted.

The second and third years of law school were particularly tumultuous: demonstrations, blocking the doors; sit-ins at the US Attorney’s Office; pretend war games all around the campus; attacks by riot-geared cops and sheriffs if you were out at the wrong time; and “in-your-face” arguments with the war supporters who never served, like the quoted David Keene. The war was on everyone’s agenda and it morphed into a Black Students’ Strike and a wide range of social injustice issues.

That night on Bascom Hill, pungent rain pouring into my eyes, ironically opened them to the reality that true revolution would not come through demonstrations. Only a small number of students truly put themselves on the line in meaningful ways. While the threat of the draft and Vietnam service, possible disability, and death provided a real dose of motivation, few were committed to enduring change beyond self protection. I decided that night I would get to work where it really mattered, serving low-income people in the Milwaukee community with Milwaukee Legal Services, where I was fortunate enough to have a clinical placement and later work representing low-income and underserved people for a number of years.

It was a fascinating and difficult time, seared into my memory and largely responsible for a number of professional decisions I made over the years. Thank you for the reminders.
Very truly yours,