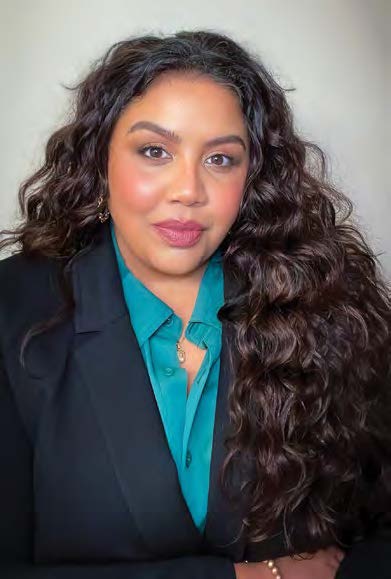 Ashley Morse ’06 is the first woman of color on the Rock County Circuit Court Bench.

In April 2022, Governor Tony Evers appointed Ashley Morse ’06 to Rock County Circuit Court–Branch 4, making her the first woman of color to serve on the bench in Rock County. Morse will complete a term ending July 31, 2023.

When asked what that appointment meant to her, Morse said, “It means YES. It means that we are moving toward a more perfect union where there is a space in our most revered institutions for people who look like me and who have made the choices in terms of a legal career, that I have. It is meaningful to me, and I hope to others who may follow me.”

It was fear and hope that initially encouraged Morse to pursue a career in law.

“I was afraid we could not move on from the past and hoped the future would be better through my practice of law,” she said.

The notions of fairness and equity have always been foundational to Morse.

“I remember filling out the demographics section on a standardized test in fourth grade and telling my teacher that there was not a box for me in the ‘race’ section,” Morse said. “You could pick white, Black, Hispanic, or other. I had a white mother and Black father and wanted to mark both boxes. I was told that was not acceptable. I was told to mark ‘other.’ That didn’t seem fair to me and also felt hurtful in a way I had not previously experienced.”

It was from that point on that Morse said she felt she was different.

Morse was the first in her family to attend college and the first to go to law school. Her mother and grandparents worked factory jobs, and her siblings both pursued careers in the trades.

It wasn’t until college, where she studied history and the African diaspora and social movements, that Morse learned about “how rich and vibrant and strong and beautifully multi-dimensional my history was.”

It was also during college that she learned that so much of the Black experience in America has been shaped by the decisions of our courts, she said.

“From Dred Scott to Brown v. Board of Education, I was struck by the reality that a group of powerful people could get together and decide what rights other people have and how they can be treated,” said Morse. “It struck me that those judicial decisions defined much about what my day-to-day life looked like. I saw in our history the tremendous potential for both harm and good. I knew that pursuing a career in law was essential for my hopes for the future.”

Initially, Morse said she found the Law School to be intimidating, but she became involved in the School’s Black Law Students Association and other affinity groups. The friendships she made and the support she found in those organizations were crucial to making law school a successful experience for her.

With her judicial career still new, Morse said she is looking forward to the future.

“The positive, welcoming reaction from the community to my appointment has been so special to me,” she said. “I am committed to work every day to make our system more accessible, inclusive, and fair. I’m so honored for this opportunity.”