How can the conduct of lawyers and judges in Nazi-occupied Europe inform professional ethics today? Ben Levey, a rising second-year law student at University of Wisconsin Law School, spent his summer reflecting on that and much more.

Levey was one of just fourteen law students and early-career attorneys selected from around the world for the 2022 Fellowships at Auschwitz for the Study of Professional Ethics (FASPE). Levey spent two weeks in Germany and Poland, where he and other law fellows explored legal ethics through a historical lens, from the rise of the Nazi party through the Holocaust and beyond. 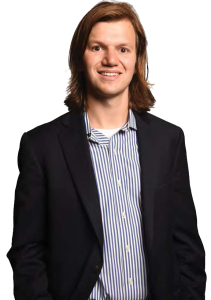 “I was interested in learning more about the Holocaust,” said Levey, who previously worked for HIAS (originally known as the Hebrew Immigrant Aid Society), a Jewish-American organization dedicated to helping refugees and asylum seekers. “And also, this just seemed like politically the right time to do this in that we’re in a moment of fascism on the march, a moment of growing antisemitism. It felt like an amazing opportunity to do the right thing at the right time.”

The fellowship brought Levey to sites ranging from the small town where the Nazis first experimented with using a gas chamber to kill people with disabilities to various concentration camps to the villa outside Berlin where the Nazis plotted their “Final Solution.” The fellows explored how German lawyers, judges, and other professionals were complicit in those atrocities.

The fellowship also touched on more contemporary issues, such as the actions of a law firm that was defending a Swiss bank against descendants of Jewish residents whose assets had been seized by the Nazis. Witnessing the site of a famous Nazi book burning in Berlin, Levey also found himself thinking about modern-day controversies in the United States around critical race theory and pushback against some books in libraries and schools.

Levey, who is Jewish, is still processing the intense fellowship experience.

“It really destabilized me, but also I think it bolstered my sense of identity, and I think this will be a source of inspiration going forward,” said Levey, who is considering focusing on refugee or immigration law after graduation.

While the fellowship is over, the networking with FASPE fellows will continue. And so will the lessons Levey took from the experience.

“One was the importance of collective action—lawyers and people in any space working together to take on big problems—because the problems we face now are structural, and so they need collective responses,” he said. “I think another thing that was helpful was being around a really smart, diverse set of people. It was a reminder that you always have more options in a situation than you might initially think.

“It really destabilized me, but also I think it bolstered my sense of identity, and I think this will be a source of inspiration going forward.”

When presented with ‘yes or no’ situations, you often have a ‘no, but,’ and a ‘yes, and,’ and a ‘here’s my counteroffer.’ Those are really good tools to have in the toolkit.”