When Steph Tai was a baby, their first spoken word was the Chinese word for “new.” Tai craved new tastes to the point where their parents had to get creative with food presentation to appease their toddler’s novelty-loving palate. It was the beginning of Tai’s lifelong passion for food.

Now a professor at University of Wisconsin Law School, Tai is still a foodie—and fears that future generations’ culinary options might be shrinking instead of expanding. Tai, who studies food systems and environmental law, is exploring how climate change impacts food production and what that means for culinary heritage.

“Numerous sociological studies have observed how food is an essential element of different cultural identities, in complicated ways. For example, words related to food are important parts of everyday languages, and in many languages, we speak of certain foods as synonymous to eating meals themselves, suggesting the importance of certain types of foods as an essential element of eating,” Tai wrote in a Georgetown Environmental Law Review essay titled “In Fairness to Future Generations of Eaters.”

“This is not just about our food production system, but everything. Scientist have given us less than a decade before some of these effects will be really, really difficult to reverse,” Tai said. “So, we don’t have much time left. And no one’s listening. It’s terrifying.”

Representing the Voice of Science

It was concern for the planet that drove Tai to pursue law after they first followed in the footsteps of their chemist parents by earning bachelor’s and doctoral degrees in chemistry.

During graduate school, Tai worked with Mario Molina, a Nobel Prize–winning chemist who was pivotal in showing how human use of chlorofluorocarbons (CFCs) had severely depleted the ozone layer. But the non-ozone-depleting substitutes, hydrochlorofluorocarbons (HCFCs) and hydrofluorocarbons (HFCs), turned out to be intense greenhouse gases. As Tai studied the global-warming potential of HCFCs and HFCs, they also took policy courses.

“I started becoming concerned about how scientists were basically getting ignored in policy making,” Tai said. “I really did go to law school to try to figure out how to better advocate for climate scientists specifically because of climate change concerns.”

In addition to Tai’s scholarship, they’ve represented groups ranging from commercial fishers to organic farmers to climate scientists through amicus briefs in environmental cases before the U.S. Supreme Court and federal circuit courts. It was a niche Tai stumbled on after realizing that relatively few environmental cases had scientific amici.

“I think a lot of times science doesn’t get communicated to courts very well, especially because judges are lay people and they often don’t have these additional backgrounds,” Tai said. “I think they sometimes treat science as magic or mumbo-jumbo. And so, what I find important in these briefs is not just to explain what the current scientific understanding is, but how that scientific understanding is developed so that it’s much more accessible. There’s a whole process behind it, verifying and validating and continuing to refine theories.”

The Future of Food

Outside of court, Tai studies what’s happening in the world as environmental changes continue to unfold.

“There’s been a lot of types of foods that are disappearing because of changes in climate,” Tai said. “One thing that I teach in my Food and Agriculture Law course is how farmers have to adapt to climate change and also how some of the deforestation that is leading to farms also contributes to climate change by losing a lot of the carbon sinks (areas that absorb carbon from the atmosphere). For example, in the U.S., droughts and lower precipitation in California are leading to lots of different stressors—just people living and needing water to depend upon, stressors in terms of the agricultural industry, stressors in terms of wildlife. And I think we’re going to see a lot of those kinds of stressors.”

At risk are some of the most beloved foods and drinks around the world: wine, coffee, and chocolate, among others.

“For example, in Napa Valley, even the slightest taint of smoke from wildfires really just ruins wines,” said Tai. “And we’re seeing more and more wildfires as a result of both our patterns of maintaining forests and also climate change.” 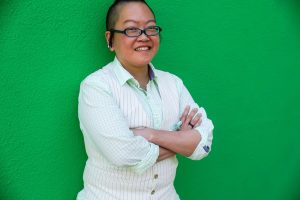 “I started becoming concerned about how scientists were basically getting ignored in policy making. I really did go to law school to try to figure out how to better advocate for climate scientists specifically because of climate change concerns.”

“There are also concerns that climate change might affect beer because of barley production,” Tai said.

Changes in temperature can lead to more pests and plant diseases as well.

Beyond the effects on crops and livestock, extremely high temperatures can make it more difficult for farm laborers to do their work. Extreme weather patterns can also affect how food is transported and preserved.

Like many aspects of environmental justice, those who contribute the most to environmental harms probably won’t experience the greatest impact.

“If you’re a big producer, you can always buy land elsewhere and try to move your crops there. It’s more about whether or not you can do that. It’s probably going to affect the small-scale farmers more,” said Tai.

It’s not enough to preserve the mere existence of certain foods, Tai said. It’s also important to protect food quality. For example, hotter temperatures affect the flavors of many foods,  such as the sweetness of Georgia peaches. According to Tai, intergenerational equity is at  take if the practices of past and current generations of eaters and drinkers leave a less flavorful world for future generations.

Fighting Back Against Climate Change

So, what can be done?

Existing legal protections are slim but include the United Nations Educational, Scientific and Cultural Organization (UNESCO) Intangible Cultural Heritage Program. Once a food or culinary process is listed through the UNESCO program—as is the case with Arabic coffee and Neapolitan pizza—it’s eligible for safeguard measures, primarily through education and limited financial assistance. There’s also the International Treaty on Genetic Resources for Food and Agriculture, which focuses on genetic plant material.

“But otherwise, it’s relatively little, and it doesn’t provide that stronger infrastructure that I think is probably necessary to face the threats arising, not only from climate change, but other sorts of environmental considerations,” Tai said.

However, some are exploring other pathways to legal protections for food and culinary heritage.

“The White Earth Band of Ojibwe in Minnesota adopted a tribal law that recognizes wild rice as having the right to exist,” said Tai. “Part of that is because wild rice is such an important part of their heritage, not just culinary heritage, but just a way of living. And they’re using that to fight pipelines, under at least tribal law.”

It remains to be seen whether those tribal protections would hold up in a federal court, but it’s a major milestone as the first case of a legal protection being given to a food, said Tai.

Food and drink producers can also play a key role in fighting the effects of climate change. One important strategy is by lowering the carbon footprint of the agricultural and livestock industries.

“There are a lot of things that can help,” said Tai. “Lowered use of agrochemicals because many of those are actually quite fuel-intensive; having more agroforestry, which is maintaining both forests and agriculture at the same time to allow for more carbon sinks; and lowered reliance on livestock. I’m not trying to suggest everyone has to go vegetarian, but livestock tends to be much more carbon-intensive than a plant-based diet.”

Decisions made later in the supply chain process can also make a difference. Drew Cochrane ’99, former chief operating officer of New Glarus Brewing Company, spoke to Tai’s class on advanced contracts and shared how New Glarus moved from bottled beer to canned beer to meet the demands of climate-conscious consumers.

“Aluminum is much lighter, and so the amount of fuel it takes to ship the beer is a lot less,” Tai said. “This business move was driven by a climate-oriented perspective.”

Companies can also embrace carbon-friendly procurement policies and build them into vendor contracts to ensure their suppliers are being carbon-friendly, Tai said.

But there’s much more to be done—and fast.

“We only have fewer than ten years. It’s drastic measure time, in my view,” said Tai. “The younger generation actually seems to care and be taking to the streets. High school students, college students, even law students are actively working to do something and care about it, and that’s more than I’ve seen in ages.”