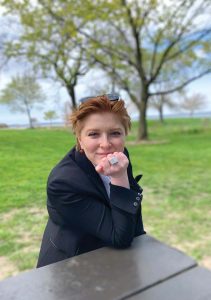 Marin Smith is the latest University of Wisconsin Law School student to be named a Stearns-Shaw Scholar. The scholarship was endowed by 1992 UW Law graduate Denis Stearns and his husband, Thomas Shaw, to encourage champions of the LGBTQ+ community to choose UW as the best place to study law and make a difference.

Smith earned their bachelor’s degree in Community and Nonprofit Leadership as well as Spanish from the University of Wisconsin–Madison in 2020. There, they were awarded the Don Gray Student Social Justice Award for their dedication to intersectional restorative justice and community organizing.

Continuing their education as a Badger, Smith is pursuing a law degree to better understand the legal system so they can implement more restorative justice processes within the world of criminal law.

Though Smith knew they didn’t plan to use their law degree in a conventional manner, they realized law school would be the best option for achieving the goals they had set for themself and the community. Having attended UW for their undergraduate studies, applying to UW Law School was “a no-brainer.”

“I had already put down deep roots in the community, particularly within restorative justice and LGBTQ+ spheres,” said Smith. “I felt dedicated to the organizations I worked with.”

The icing on the cake, Smith said, was that UW Law hosts the Restorative Justice Project, a clinic run by Jonathan Scharrer.

Working to Make a Difference for the LGBTQ+ Community

Currently, Smith is the president of QLaw, the Queer Law Students Association. It’s a group dedicated to supporting all LGBTQ+ law students as well as individuals in other affinity organizations.

As president, Smith hopes to create a larger network for queer law students and their allies to create a greater sense of intersectional community beyond the Law School.

“We are doing this by hosting cross-organizational events with organizations in the Law School and community at large to shed more light on how queerness intersects and impacts other personal identifiers,” said Smith.

Other QLaw programs Smith was engaged in included the group’s mentorship program, which matches QLaw members with queer lawyers in similar fields to create a better network of queer lawyers.

“We want to facilitate mentorship, connection, and community with this program and give our students people to look up to and learn from,” said Smith.

Unsurprisingly, said Smith, the obstacles facing LGBTQ+ lawyers are “numerous and emotionally draining,” which sometimes makes it hard to find enough mentors to participate in the program.

“But given the number of students interested, it looks as though the next generation of lawyers may have more openly queer practitioners,” said Smith.

That’s one reason QLaw is always working to promote queer visibility on campus and celebrate the queer community.

“By increasing visibility within the classroom, we are slowly able to change the norms for our peers and colleagues,” said Smith. “We hope that as we all move forward into our legal careers, we can take these more supportive norms with us to change the profession as a whole.”

A Look Toward the Future

Moving forward, Smith wants to use their law degree as a tool to promote restorative justice practices in the community and legal settings.

“Being a part of restorative justice has shown me the depth, breadth, and complexity of humanity and how a punitive system can’t take all of that into account for either the offender or victim/survivor,” they said. “I want to be the person who shows policymakers and legislators the power of restorative justice and that not only does it have a place in our legal system, but it is also a necessary component for holistic justice.”

For Smith, receiving the Stearns-Shaw scholarship transcends simply lightening their financial burden, “it also validates everything I’ve done to get here.”

“I felt a sense of relief and took it as a sign that I am right where I belong. My work in the Law School and the community matters, and to know that the School and its gracious donors are paying attention means the world to me,” they said. “I can only hope to be in the position to donate a similar scholarship some day and give another queer student the affirmation and burden-lightening I have received.”