Wisconsin’s roots in the law-in-action tradition run deep, and the new Research Handbook on Modern Legal Realism could help that philosophy branch out at other law schools.

Edward Elgar Publishing approached Beth Mertz, the John and Rylla Bosshard Professor Emerita, to edit the ambitious, 544-page project. She recruited co-editors Heinz Klug, Evjue-Bascom Professor of Law at the UW, and Shauhin Talesh, a law professor at the University of California, Irvine.

What the UW calls “law in action” — how law is applied in the real world — is closely intertwined with legal realism, the interdisciplinary, empirical study of law. Social scientists are the ones leading most law and society research today, and the book was written as an appeal to lawyers and law professors, Klug says.

“While legal realism was very successful early on, and the law and society movement was an outgrowth of legal realism, the rest of legal society went back to studying the doctrine,” he explains. “But that is not producing a deep understanding of what the law does. Law isn’t just interpreting words on paper — there’s a lot more going on. If you want to produce students who have a deep understanding of how we can transform the law and change the law and make it more just, you have to look at how law functions in the world.” 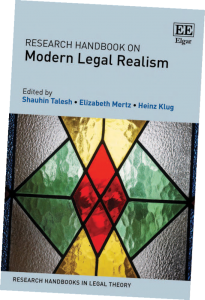 “This was a movement that started around the turn of the millennium, and it came out of Wisconsin Law School,” Mertz explains. “The reason it got started was that law and economics as a movement had really taken over the law schools in a lot of ways, and it was time for an answer to that. Wisconsin Law has always been a leader in the law and society movement. The whole idea was to take the Madison tradition and the tradition of law and society, and not have one discipline win but have all the disciplines work together to understand law.”

The first part of the new handbook delves into the history of legal realism, while the second part explores present dilemmas through the prism of new legal realism. Contributors from around the world submitted chapters on topics ranging from policing to immigration to globalization. Other current and former UW Law professors who contributed to the book include Mitchell, Marc Galanter, Alexandra Huneeus and Marsha Mansfield.

One chapter focuses on the Midwest. “A lot of the accounts of the legal realism movement have focused on the East Coast, and there’s been this tradition of Midwestern legal realism that’s been ignored,” Mertz says.

But the Midwestern tradition is strong — and getting stronger, in part because of UW Law, she notes.

“This has always been a place that really cares about law in action,” she says. “Finding out accurately about law in action through social science and good clinical training is a tradition that got its start from Madison, and it’s thriving.”