In a democracy, citizens are supposed to choose their legislators. In Wisconsin, legislators have chosen their voters.”

The Supreme Court will decide whether Wisconsin’s Republican-controlled legislature violated the Constitution by redrawing voter district maps that were unfairly partisan. The outcome could shape elections throughout the country. 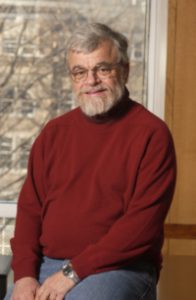 Professor Bill Whitford is the named plaintiff in the US Supreme Court case Gill v. Whitford. Widely considered the most important gerrymandering case in decades, it involves district lines which, according to Whitford and his co-plaintiffs, were unconstitutionally drawn in 2011 to benefit Republicans.

“There is no remedy for excessive gerrymandering other than Supreme Court action,” says Whitford. “In a democracy, citizens are supposed to choose their legislators. In Wisconsin, legislators have chosen their voters.”

Whitford’s path to the Supreme Court has been years in the making. In 2013, he and a group of concerned citizens gathered in Milwaukee’s Watts Tea Shop to discuss Wisconsin’s 2011 reapportionment. The group begin assembling data, reviewing facts, and meeting with experts.

In 2015, Whitford, together with 11 other plaintiffs and a team of lawyers, filed a lawsuit with the US District Court for the Western District of Wisconsin. Ruling in the plaintiff’s favor, the court concluded that district lines were drawn to suppress representation of political views in the legislature.

“Historically, it’s been extremely rare for a court to rule that a state’s gerrymandering was excessively partisan,” says Whitford. “At a trial in front of three federal judges, two of whom were appointed by Republican presidents, the evidence clearly established that Wisconsin has one of the most partisan legislative gerrymanders in the nation.”

The effect, Whitford says, could be lasting: if the gerrymander remains in effect, it guarantees that Republicans will control the legislature that drafts the next apportionment after the 2020 census, perpetuating the problem into the next decade and beyond. 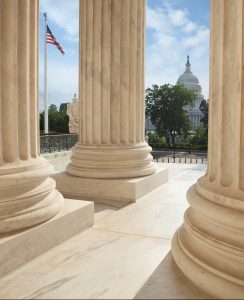 The Supreme Court will review the decision of the District Court for the Western District of Wisconsin’s ruling that the 2011 redistricting plan was unconstitutional.

This isn’t the first time the Supreme Court has grappled with partisan gerrymandering. In 2004, the court heard Vieth v. Jubelirer. Although the Justices expressed concern about expressive partisanship in districting, they declined to establish specific limits on the practice.

Whitford’s group has proposed a new test, called the “efficiency gap,” that they say measures the discriminatory effect of any districting plan. By this test, Wisconsin’s current districting is one of the most discriminatory in the past 40 years, Whitford says.

The Supreme Court heard arguments this fall and likely won’t decide the case until next year.