Dan Cornelius ’09 is familiar with the challenges and opportunities of launching a business on tribal land: he founded the Mobile Farmers Market to help Native farmers, ranchers, food producers, and other entrepreneurs get their products from remote reservations to bigger markets.

“Our tribes have entrepreneurs, but we could have so many more,” says Cornelius, a member of the Oneida Nation. “The reality is we’ve had a lack of access to capital in our communities for generations and a lack of infrastructure, and those are two major elements that stifle
entrepreneurship.”

New businesses could infuse much-needed economic growth into the state’s tribal communities. But starting a business on tribal land can be challenging, as Native entrepreneurs need to navigate Wisconsin and federal laws as well as each tribe’s own legal system. And many tribal governments aren’t set up to facilitate business.

“Part of the exciting opportunity with this project is you’ve got the same challenges of any new business—how to incorporate, how to deal with taxes, how to structure your enterprise in a way that maximizes your chances of success,” says Cornelius, who works as the program’s outreach director. “But you’ve also got treaty rights and a whole other layer of Indian law that is intertwined with these legal questions. Indian law is complex, it’s ever-changing, and on some of these legal questions, the answer isn’t necessarily clear.” 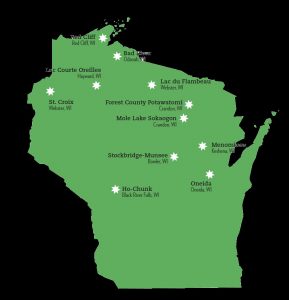 The Great Lakes Indigenous Law Center previously partnered with the American Indian Chamber of Commerce of Wisconsin to help Native-owned businesses become certified as disadvantaged businesses, which is helpful when bidding on contracts. “That was incredibly successful,” says Richard Monette, a professor of law, director of the center, and member of a Chippewa tribe. “Before that initiative, fewer than ten Native-owned businesses had attained Disadvantaged Business Entity status, and in the span of a couple of years, it grew to more than 70. It showed the need and desire for more business support.”

That message was also echoed during a summit between the University of Wisconsin and area tribes in 2015. “What we heard was the tribes were interested in creating more businesses,” says Anne Smith, clinical professor and director of the Law & Entrepreneurship Clinic. “Gambling was working for some tribes but not all, and they were looking for businesses they could start that were more consistent with their culture and traditions.”

The Law School’s Tribal Entrepreneurship Program began a year later. Law students, under the supervision of clinical faculty, assist Native entrepreneurs with everything from crafting business plans to providing legal consultation on issues such as trademarks and taxes. The program has worked with a handful of clients so far, including an agricultural business, an organic clothes-maker, and a nonprofit that aims to attract more Native Americans to medicine and other health careers.

Our tribes have entrepreneurs, but we could have so many more. The reality is we’ve had a lack of access to capital in our communities for generations and a lack of infrastructure, and those are two major elements that stifle entrepreneurship.”

Monette’s goal is to assist at least one business on each reservation in the state, in addition to helping tribes write business laws. “We’re building models and templates that can be used across Wisconsin and perhaps across the country,” he says.

The program’s leaders say the project captures the essence of the Wisconsin Idea. “When you start to read about the economic state of reservations in Wisconsin and around the nation, then you realize that whatever we can do to spark something to improve that situation is a step in the right direction,” Smith says. “We’re reaching out to areas of the state that are underserved and underrepresented, and what better way to live out the Wisconsin Idea than that.”

The program is mutually beneficial. “It’s also about how those Wisconsin communities can have positive impact and influence the university, and to me, that two-way street is what’s so exciting about this project,” Cornelius says. “There’s just as much that can be learned and gained from working with tribal communities as the tribes gain from working with the university.”