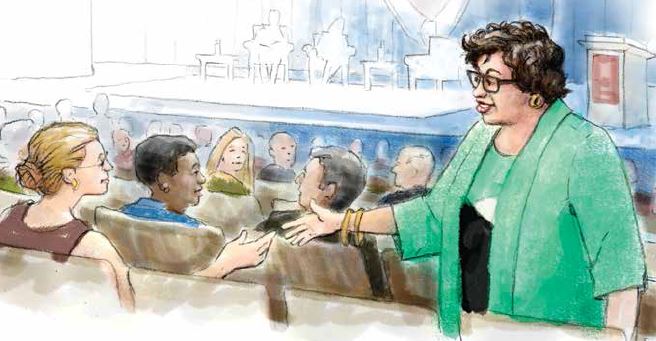 Filled with excitement and nervous energy, third-year law student Sofia Ascorbe waited for one of the biggest moments of her life: a personal meeting with US Supreme Court Justice Sonia Sotomayor. “Meeting her was sort of overwhelming,” says Ascorbe, who is president of the Student Bar Association (SBA) and an executive board member of the Latino/a Law Student Association (LLSA). “She is the first Latina to serve as a US Supreme Court Justice, and knowing she shares a lot of my culture was really special to me.”

It was the first time a Supreme Court Justice had visited UW’s Law School in 15 years, and it was a day to remember for students and faculty alike. In addition to speaking at the day’s marquee event, the annual Robert W. Kastenmeier Lecture, Justice Sotomayor tried to make as many personal connections as possible — including that quiet one-on-one with Ascorbe and Nicholas Dalla Santa, who is president of LLSA and treasurer of the SBA.

Michael Hall, the Law School’s director of student life, arranged the meeting. “I thought the Justice would like to meet these two great people who do a lot for their fellow students and the community,” he says.

Justice Sotomayor had some advice for the pair.

“She told us that in hindsight, one of her regrets was not making more connections while attending Yale Law School, and that she was really proud of us for building bridges. She said that big but soft voices often impact communities, and that taking leadership positions in the community is the only way to create change and to build bridges between majority and minority groups,” Ascorbe recalls.

Justice Sotomayor was the fifth US Supreme Court Justice to visit the Law School in the past five decades. Her action-packed visit on September 8 included five events: a breakfast for faculty and staff (Justice Sotomayor’s idea), a session with local middle schoolers (another request by the Justice), lunch with UW Law students, the Kastenmeier Lecture in the packed Wisconsin Union Theater, and then dinner with a group from the Law School later that evening.

“It was a very big day for our Law School. Having any Supreme Court Justice visit is a big deal, but this visit meant a lot for many reasons,” explains Dean Margaret Raymond. “Justice Sotomayor is completely tireless and she’s unbelievably accessible. People were very excited just to hear her speak, but having someone who gave so much of herself made it even more incredible.”

Free tickets to the main event were claimed in minutes. The 90-minute Q&A discussion was moderated by UW Law Professor Robert Yablon and US Department of Justice attorney Lindsey Powell. Both clerked for Justice Sotomayor from 2009 to 2010, her first year on the Court.

“It was one of the most energized that I’ve ever seen the Law School faculty and students. People were extremely excited to see her,” says Yablon.

Justice Sotomayor’s style took some by surprise. Instead of remaining on the stage at the Wisconsin Union Theater, she started walking through the aisles, shaking hands, touching shoulders, and posing for photos. “It put a lot of us at ease,” Ascorbe says. “It showed that someone who is a celebrity in her own right and own field was human. She’s such a genuine person.”

Yablon heard many in the audience comment on Justice Sotomayor’s warmth later. “It reminded me of how amazingly she can captivate an audience, even in a huge auditorium, and manage to reach out to people individually,” he says. “No matter how big the crowd is, she can make it feel very personal and intimate. She has an incredible gift for connecting with and engaging with everyone she encounters.”

At dinner, Justice Sotomayor announced, “If it’s okay, I’m going to move around.” Then she hopped from table to table so she could talk to everyone there.

“She’s really conscious about the fact that it means a lot to people to have contact with her,” Dean Raymond says.

But it wasn’t just her warmth that was impressive. “She’s very substantive,” Dean Raymond says. “She talked about her philosophy of judging. She’s been a trial-level judge, a mid-level appellate judge, and a Supreme Court Justice. She talked about how she thinks about the role of judging, and it was thoughtful and deeply intelligent. She doesn’t just give the expected answer.”

At one point Justice Sotomayor told the audience, “I had not anticipated how hard decision-making is on the court because of the fact that we are affecting lives across the country, and sometimes across the world, in our rulings. I’m conscious that what I do will always affect someone negatively. Judging brings me less joy in this situation because of it. Mind you, I only vote in the way that I think is right under the law, but justice has a price, and it’s one that I think all of us should remember.”

She mentioned how a teenager had asked her earlier in the day how being a Latina affects her judging, and she noted the many pieces of her background that shape her perspective — her Catholic education, her time as a prosecutor and commercial lawyer, her experiences serving on three levels of the court system, and more. “I am a human being first and foremost … In all of that mix, there’s just me, and there isn’t one piece of me that takes control in judicial decision-making,” she explained.

She also talked about her belief in being a citizen lawyer and how she hopes to inspire everyone to do more. “If I can make you walk out of this auditorium more invigorated about participating, about becoming more civically involved in the way you choose — work in your local schools, work in your churches, work in your block associations, work to make this a better place for everyone — then I’ve accomplished my goals,” she said. “Because if we work at it together, we can actually improve some of the bigger problems that our society faces.”

Justice Sotomayor is passionate about sharing her perspective with the general public, Yablon notes.

“She was very open and candid about her experiences on the Court,” he says. “She is someone who, probably more than any of the other justices, is really willing to put herself out there. Part of that is her personality and part of that is she really does believe in the importance of connecting people with the Supreme Court and the judiciary, which is the branch of government that’s the least familiar to the public.”

“She grew up in a minority community and was born to Puerto Rican parents in the Bronx in New York. She had a different path of life than many of our current and past Supreme Court justices. It’s important that we at the Law School hear stories like hers,” Ascorbe says. “It gives people hope to hear her story and see how she’s so successful.”

The culmination of months of work

It took months of behind-the-scenes planning to ensure a seamless visit. “The security that is required to make sure that these places are safe for dignitaries of this caliber is pretty extraordinary,” Dean Raymond says.

Fortunately, the Law School has experience with heightened security practices from previous visits by judges from the US Court of Appeals for the Seventh Circuit, events that also require canine walk-throughs and security checkpoints with metal detectors.

“We have really wonderful partners in the US Marshal’s Office,” Dean Raymond says. “We value our partnership with them and with UWPD.”

Then there were the logistics of managing Justice Sotomayor’s busy schedule.

“The people in our External Affairs office did an incredible job with logistics, dealing with her security, getting her place to place, and just figuring out how to fit in everyone who wanted to see her,” Yablon says. “She has incredible stamina, and when she makes a trip like this, she wants to have a full plate; she wants to make the most of her experience.”

That’s why Justice Sotomayor requested to meet with local middle schoolers. “Whenever she travels for an event, she’ll almost always try to speak to a school group because she wants people at a young age to become familiar with the Supreme Court,” Yablon explains. “She wants them to think about the law in a way that they haven’t before, and she wants to inspire them with her own compelling and inspirational life story.”

When Justice Sotomayor had some downtime in between events, she surprised her hosts with another request. “Instead of wanting to put her feet up or respond to email or just relax, she wanted to see the football stadium and the rest of the campus,” Dean Raymond recalls.

And so, escorted by US Marshals and UW police officers, the Justice went to Camp Randall Stadium, where she posed for a photo on the field. Her genuine interest in places and people didn’t wane as the day went on.

Says Dean Raymond, “We were all profoundly grateful to the Justice, not only for making the time to visit, but for giving so much of herself in the process.” •