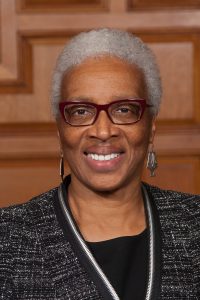 The day her family’s refrigerator got repossessed is the day Geraldine Hines realized her life’s calling.

Hines recalls thinking, “This isn’t fair.” She was around 12 at the time, the oldest of ten kids growing up in Greenville, Mississippi. “I may not have thought ‘lawyer’ at that moment, but in a more general sense I realized I needed to be in a position where I could help people facing harm or humiliation, and where I could join like-minded people determined to change the status quo,” she says.

Today, nearly six decades later, Hines is an associate justice on the Massachusetts Supreme Judicial Court. When Governor Deval Patrick appointed her in 2014, she became the first African American woman to hold that position.

Hines says her early experiences in Mississippi — ground zero in the bloody 1960s battles over segregation and voting rights abuses — instilled a spirit of rebellion in her that sustained her throughout her career. Since then she’s never strayed from the pursuit of justice: from leaving home at 16 to enroll in Tougaloo College, a historically black liberal arts institution near Jackson; to heading north to attend UW Law School; to practicing civil rights law for three decades in Boston; to observing elections and investigating human rights abuses in Africa and the Middle East; and ultimately, to earning a series of appointments on the Massachusetts bench.

“I chose work that was important to me and my community,” Hines says. “For me, that always meant following some problem that needed attention, that not too many other lawyers were involved in.”

She worked at a public defender’s office right out of law school, because she wanted to help indigent defendants who weren’t getting a fair shake in the system. Later, she went to work for the Center for Law and Education at Harvard University to address education discrimination, because she’d heard students of color were being disproportionately suspended and expelled from schools in the South.

In private practice, as partner in the first women of color–owned firm in New England, “Our little firm took cases that most big law firms wouldn’t touch,” Hines says. “We tried to represent folks who had legiti­mate justice concerns, whether or not they had the means to pay for our services.”

Hines returned to UW Law School last summer to receive the Wisconsin Alumni Association’s highest honor, the Distin­guished Alumni Award. During her visit, she discussed the decisive moments that shaped a successful law career, a career grounded in her early Mississippi learning and cultivated by her unwavering quest for justice.

Follow her extraordinary path on the timeline below, or link to a text version.