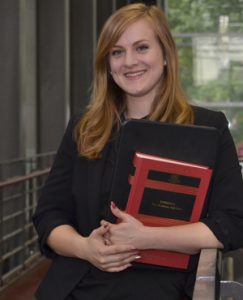 When Lucie Butner submitted her application to the University of Wisconsin Law School, she had a part-time job in Appleton, an unemployed husband, two small children, and a passion for the law.

But she also had the backing of scholarship donors to the Law School, whose vision helped put Butner’s dream within reach.

“I decided to go for it, in a leap of faith,” says Butner, now a second-year law student. “I was driven. I just really wanted to pursue law school. The scholarship that I received made that decision possible.”

Butner received the Angela and Jeffrey Bartell Scholarship, provided by the two UW Law graduates to aid promising students who face economic circumstances that are a significant obstacle to studying at the Law School.

Last year, the Butners moved to an apartment in Fitchburg; Lucie’s husband, Sean, landed a job at Epic Systems; and Lucie began juggling school and family while building toward a career in public interest law.

“I’m interested in criminal law, and I want to help people who don’t have resources. Having the scholarship on top of the affordable, in-state tuition is just amazing,” says Butner, who worked with the Wisconsin Innocence Project after her first year in law school. “People have big ambitions when they go to law school, but the price tag for that education comes calling.”

That’s one reason the Law School is placing a top priority on raising funds for student scholarship support during the university’s just-launched comprehensive campaign. Time and again, scholarships help put law school within the reach of students who go on to build life-changing legal careers.

Dean Margaret Raymond says scholarships are essential to attract and retain a world-class, diverse student body in a competitive marketplace. 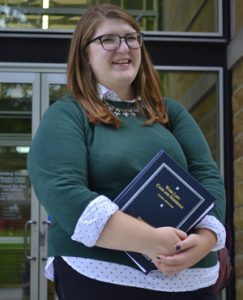 “Student support is essential,” Raymond says. “We’ve always been a place that accepted students from all walks of life and offered a transformative legal education.”

Raymond says that the Law School — with instate tuition costing $21,372 and nonresidents paying $41,074 — is one of the most reasonably priced institutions in the nation, especially given its quality. But she also recognizes that law school is a significant investment for every student.

“It’s important to help students afford this education and enable them to choose careers that are their passion without having to worry about how they’re going to make a lot of money and pay back a significant debt load,” she says.

Law schools nationally have been challenged in recent years by declining applications and enrollment, and UW Law School is no exception. The incoming class in 2011 was 242 students, a number that fell to 186 in 2013, 158 in 2014, and rebounded a bit to 186 this year.

That makes competition for top students intense, and that’s where scholarship money can make a real difference. Ohio native Sophie Crispin, a graduate of Ohio Wesleyan University, was considering several Big Ten schools, but her scholarship here clinched the deal. Now second-year law student, she plans to pursue a career in employment law and litigation.

“Going to law school was my dream,” Crispin says. “Having the scholarship was being given the freedom to take this dream that I’ve always had and make it look like whatever I want it to look like.”

She received the Stearns-Shaw Scholarship, made possible by Denis Stearns, a 1992 grad, and his husband, Thomas Shaw, in the memory of Stearns’s mother, Julie Stearns. The scholarship goes to a student with a record of activities that advance LGBT issues, who is likely to use the education to further that work.

Getting the scholarship was a relief to Crispin, who carries debt from her undergraduate career. “I didn’t want to wake up in a cold sweat, worried about debt,” says Crispin, whose work at Ohio Wesleyan helped to establish a gender-inclusive housing policy at the university.

Today she’s working with the school’s Neighborhood Law Clinic, which handles landlord-tenant issues, public benefits, and wage and hour cases. “I’ve gained so much confidence,” says Crispin. “At first, the idea of going to law school was a nebulous one. As I went on, I got a clearer picture of what I might do with it. I’ll be able to make a difference in people’s lives. I’m grateful for this education.”

Raymond says the Law School has paid increasing attention to the financial health of law students in recent years. 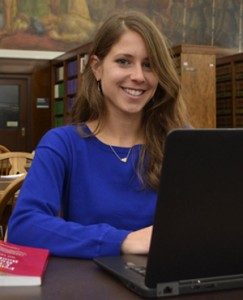 The school developed a “thrifty budget” to help students find ways to cut costs — for example, by having a roommate to share rent, insurance, and utility costs. When Raymond started as dean in 2011, the school also began talking about student debt as part of orientation.

“The good news about this is that students are very aware of the cost of their education. They are attentive to and concerned about debt, and we’ve been very involved in that.”

It’s become a buyer’s market for prospective law students. It used to be that students got an acceptance letter with a financial aid offer, and they could take it or leave it. That’s all changed.

“These days, students come in, and they’ve got their four offers, and they lay them out on the table, and they say, ‘Here’s what Indiana is doing for me. Can you match it?’ It’s a negotiated environment,” Raymond says, in which students are very attentive to the relationship between cost and quality.

Getting a scholarship was a priority for Aubrey Hetzneker, a first-year student with an art background, a drive for public interest law, and an aversion to debt.

“My scholarship allows me to focus on what I want to do and not feel as burdened by the idea of debt,” she says. “I feel freer to do what I’m passionate about without fearing the financial repercussions.”

Hetzneker came to UW because of its nationally known clinical program and received the Christine Ebert Memorial Scholarship. Ebert was a 1996 graduate, and her family created the scholarship for students who “reach for their highest goals, all the while remembering those less fortunate and in need.”

Hetznecker taught art to prison inmates and children in the Hunts Point area of the south Bronx on her way to earning a bachelor of fine arts from Cornell University. She then joined Teach For America and earned a master’s in art education.

She moved to Brookfield with her husband, Peter, and makes a two-and-a-half-hour round-trip commute each school day.

“I’m not going to make as much money in the long term, and so paying off loans won’t be the main focus of my career as a lawyer. The focus can be on the work,” Hetznecker says.

Raymond has worked to strengthen ties with friends of the Law School and boost support for students. The comprehensive campaign provides another avenue for building donor relationships.

“It enables us to tell inspiring stories about giving and impact,” Raymond says.

Butner knows firsthand the difference that a scholarship can make for a family and a career.

“Any amount of help to students who don’t have a financial advantage will make a difference,” she says. “A donor investing in a scholarship is providing an education for a law student that they will have forever, and it only increases in value.”