Jo Deen B. Lowe ’85, Jo Anne House ’93, and Dan Cornelius ’09 were named among Wisconsin’s thirty-nine most influential Native American leaders by Madison365. Those highlighted on the list are dedicated leaders of Wisconsin’s Indigenous communities. They include elected leaders, business leaders, and community leaders doing difficult, important work, often in the face of discrimination and generations of oppression.

House is chief counsel for the Oneida Nation. She graduated from University of Wisconsin Law School in 1993 and went on to earn a PhD from Walden University in public policy and administration with a focus on deliberative democracy within Tribal governments with a goal of developing a tool that can be used by Tribal governments to improve information, discussion, and decision making at membership meetings.

Cornelius is a member of the Oneida Nation of Wisconsin and outreach specialist and deputy director of the Great Lakes Indigenous Law Center at UW Law School. For seven years, Cornelius worked for the Intertribal Agriculture Council in partnership with the U.S. Department of Agriculture. His work has focused on assisting Native Nations and their members with development of Native agriculture and food systems, promoting improved access to USDA programs, including conservation, value-added production, and infrastructure development, as well as expanding intertribal trade and commerce. 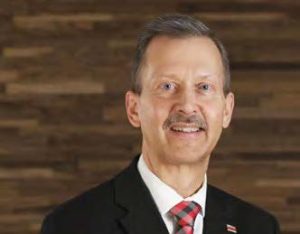 James C. Babler ’79, Barron County Circuit Court judge, is the 2022 recipient of the Wisconsin State Bar Bench and Bar Committee’s Judge of the Year award. The award recognizes an outstanding circuit court judge who has improved the judicial system during the past year through leadership in advancing the quality of justice, judicial education, or innovative programs. Judge Babler was first appointed in 2003, elected in 2004, and re-elected three times.

Jane M. Beckering (Buchanan) ’90 was appointed by President Joe Biden to the U.S. District Court for the Western District of Michigan. She was approved by the U.S. Senate and began serving as a U.S. District Judge in December 2021. Her investiture was at the Gerald R. Ford Museum and Library in Grand Rapids, Michigan, on June 4, 2022.

Ansel ’93 recently retired from private practice to focus on environmental issues. Previously, he was at Loeb & Loeb as a partner in the corporate department specializing in mergers and acquisitions, partnerships, and joint ventures. He now serves as a trustee of the Waterkeeper Alliance and as a director for the Westchester Land Trust.

Gregory M. Davis ’97 received a Cornerstone Award from the Lawyers Alliance for New York. The award honors outstanding business and transactional lawyers who have provided superior pro bono legal services to nonprofits that are improving quality of life for low-income New Yorkers. Davis was recognized for his work in fielding pandemic-related legal issues for nonprofits.

Mark W. Vyvyan ’97 was included in Minnesota Lawyer’s POWER 30 in Construction and Commercial Real Estate. Honorees were selected by Minnesota Lawyer’s editorial team, who conducted interviews with respected professionals around the state of Minnesota. Vyvyan is an attorney with Fredrikson & Byron.

Julie D’Angelo ’98 has joined national law firm Dykema’s new office in Milwaukee, where she serves as an attorney in the mergers and acquisitions practice group.

Rhonda K. Frank-Loron ’00 began working as a senior policy specialist for the Crime and Justice Institute based in Boston, Massachusetts. Initially, her focus will be on restrictive housing reform.

Wendy S. Rusch ’00 has been appointed to serve as the Wisconsin State Chair of the American College of Trust and Estate Counsel. Rusch is a shareholder in Reinhart Boerner Van Deuren s.c.’s Trusts and Estates and Corporate Law practices, where she focuses on estate planning, family business succession planning, retirement planning, prenuptial and postnuptial agreements, as well as probate and trust administration.

Benjamin S. Wagner ’03, of Habush Habush & Rottier S.C., received the 2021 Robert L. Habush Trial Lawyer of the Year Award from the Wisconsin Association for Justice, the state’s largest voluntary bar association. The prestigious award recognizes Wagner for his exemplary abilities to successfully litigate complex claims before a jury, mentorship of the next generation of trial attorneys, and leadership in navigating the challenges posed to courtrooms by the pandemic.

Chiann Bao ’07 was appointed as a Trustee of the British Institute of International and Comparative Law in February. Bao is a full-time arbitrator and mediator with Arbitration Chambers qualified in New York and Hong Kong. She is currently a vice president of the ICC Court of Arbitration and a vice chair of the International Bar Association International Arbitration Committee among many other notable roles.

Tom O’Day ’06 has been appointed to a three-year term on the Board of Trustees of the Wisconsin Medical Society Foundation. O’Day, a partner in Husch Blackwell’s Madison office, is a member of Husch Blackwell’s Healthcare, Education & Life Sciences industry group and its Labor and Employment team. He counsels hospitals, physician groups, health systems, and individual providers on complex employment and medical staff matters.

Holly Pomraning ’08 has joined Lake Effect HR & Law in Madison. The practice is focused on management-side employment law and human resources, assisting and advising employers at every stage of the employment cycle. Pomraning is a trained and experienced mediator who previously served the Wisconsin Department of Justice as an assistant attorney general.

Richard Orton ’12 has been elected managing partner of Gass Turek LLC, a litigation boutique in Milwaukee. Orton is a trial lawyer practicing in the areas of products liability, general liability, professional liability, and commercial, construction, and insurance litigation and appeals.

Rui Lu ’13 has joined Howard & Howard in the Business and Corporate Law Group, continuing her practice at Howard & Howard’s Royal Oak office. Lu brings extensive international experience with her, working in a variety of industries and fields in China for the last decade. While there, Lu served global, publicly traded pharmaceutical companies in addition to international and domestic law firms.

Monica Mark ’13, Andrew Price ’13, and Kelsey Berns ’14 have been named shareholders of Reinhart Boerner Van Deuren s.c. Berns advises wealthy individuals and families on a wide range of estate planning matters, such as complex wealth transfer planning, charitable planning strategies, and tax planning. Mark focuses on intellectual  property matters and commercial litigation. A large part of her practice centers around appellate litigation, where clients rely on her ability to guide them through the appeals process. Price represents borrowers, lenders (traditional and non-traditional), and other related parties throughout the county in structuring, negotiating, and documenting financing transactions ranging from smaller loans to affiliated borrowers up to large and complex facilities.

Michael Weigel ’13 has been promoted to partner at Mayer Brown LLP. He is a member of the Fund Formation and Investment Management group in the firm’s Chicago office, representing private equity fund sponsors on a broad range of issues.

Blayne Nicole Christy ’14 joined von Briesen & Roper, s.c. as an associate in the Madison office. Christy represents insurance carriers and their insureds in complex legal disputes, including in areas related to construction defects, contract disputes, and professional liability claims. Christy is a member of the Wisconsin Defense Counsel.

Melissa Buckman ’16 has joined Weintraub Tobin as an associate in the Firm’s Entertainment & Media practice group.

Emma Jewell ’19 received the Milwaukee Bar Association’s 2021 Pro Bono Publico award, which recognizes individuals for their outstanding pro bono service and dedication to the practice of law. Jewell undertook successful representation of a pro bono client, devoting over 300 hours to the case, which culminated in her successful argument before the Wisconsin Supreme Court.

Connor Fleck ’21 has passed the U.S. Patent and Trademark Office Registration Examination for Patent Attorneys. Fleck, of Barrett McNagny LLP, will be able to represent clients in matters before the U.S. Patent Office, including the filing and prosecution of patent applications. Fleck concentrates his practice in intellectual property, assisting clients with filing for patents, securing trademarks, and helping to register and enforce copyrights.

Christina M. Puhnaty ’21 joined Babst Calland’s Pittsburgh, Pennsylvania, office as an associate in the Environmental Group. She assists clients with matters encompassing a broad range of environmental issues, including those related to state and federal permitting, regulatory compliance, and environmental litigation.

Brady J. Seidlitz ’22 has been hired as the new Barron County assistant district attorney. Seidlitz started with the District Attorney’s Office in June 2022.