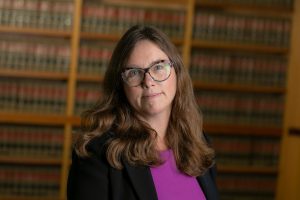 As a co-chair of the Law School’s Excellence in Alternative Delivery Working Group, lecturer Megan McDermott dove into the world of virtual learning, building guidelines and toolkits for remote instruction. It wasn’t such a big surprise, then, that UW–Madison took notice and highlighted her work as a part of Instructional Highlights, an ongoing series honoring the new ways instructors are adapting their classroom practices. For many, the virtual environment has posed new challenges for robust exchange and classroom participation. It’s something McDermott has paid close attention to, finding that detailed self-assessment tools have helped her students monitor and improve class participation.

McDermott says students sometimes point out that she “over-engineers” things in her classes. She doesn’t deny it. “I always think it’s better to over-engineer something at the start, then take away things you don’t need later,” she says.

She approached student participation in her virtual classes last fall the same way. McDermott says she has always based part of a student’s grade on class participation and engagement. Pre-pandemic, that meant she kept a log sheet and an ongoing tally of each student’s contributions.

With virtual learning, she worried that some of the usual cues that helped her get a sense of the health of a classroom community would be gone or more difficult to catch. Her solution was to create a tool in Canvas, the online course portal, that required students to regularly self-assess their engagement in various categories using a detailed point system. She also made class participation a more significant part of a student’s grade.

Students could give themselves points for obvious things like attending synchronous class sessions and watching class videos. But they could also earn points for, among other things, answering a poll, writing on a whiteboard, or raising a hand to ask a question. 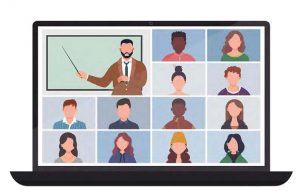 A couple of examples from McDermott’s framework:

McDermott gave students regular feedback and also asked them if there were additional ways not specified in her list in which they contributed meaningfully to the classroom community or to the collective learning experience. Students could make a case for how many points they should receive for those contributions.

The approach encouraged ownership, autonomy, and creativity — core values in McDermott’s classroom. “I think allowing students flexibility in the ways they chose to engage in the material and with each other allowed them to draw on their natural strengths and aptitudes,” she says.

An extra bonus: Students appreciated the transparency and fairness in how this part of their grade was being calculated, McDermott says.