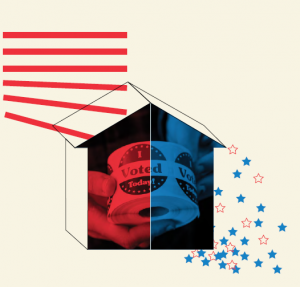 After a year of crisis, conflict, and change, four professors reflect on what the 2020 election tells us about the state of the Union, and what comes next.

If we want to locate the cracks in the foundation of American democracy and the load-bearing walls holding it up, the past year offers a blueprint of the coming legal battles over election laws, ballot access, social media reforms, and how campaigns are funded.

“There are some vulnerabilities in the system that were revealed,” says University of Wisconsin Law School Dean Daniel P. Tokaji. “Democrats and Republicans no longer regard one another as reason­ able adversaries but as the enemy, and that’s a real problem, especially in a system like ours that relies upon compromise to get things done.”

Tokaji says the 2020 election was a reaffirmation of democracy, successfully conducted in extraordi­nary circumstances with the ongoing COVID-19 pan­demic and a candidate who refused to concede despite the results. But it also raised the prospect of some partisan officials — secretaries of state, legislators, and governors — stepping in to change the results. “After
this election, the possibility that those officials could actually reverse the will of the people within a state seems greater than it was before,” he says.

In response to larger numbers of voters using mail-in ballots in 2020, state lawmakers on both sides of the political divide introduced hundreds of bills aimed at either expanding ballot access to make it easier to vote or implementing stricter security requirements and limiting early voting periods.

Tokaji says it seems like a “pipe dream” to imag­ine that Democrats and Republicans could reach a compromise such as agreeing on “reasonable iden­tification requirements” in exchange for changes to voter registration laws.

“The trend has been for blue states to liberal­ ize voting rules and red states to make them more strict,” Tokaji says. “It has been going on for years. It’s going to continue to go on.”

In March, the House of Representatives passed HR 1, a sweeping ethics and election bill that attempts to counter efforts at the state level to restrict voting access. Its prospects in the Senate are
uncertain due the 50-50 split between Republicans and Democrats.

“Republicans are talking about voting integ­rity, while the Democrats are talking about voter suppression. It’s hard to have a shared solution to a problem without a shared understanding of the
problem,” says Franciska Coleman, an assistant pro­fessor of constitutional law. “Without a shared truth, we’re going to remain a house divided, but a nation can function divided only for so long.”

The battle over voting access indexes the broader national struggle to define the scope of equal citizen­ship, says Coleman, who researches the constitution­al implications of the United States’ demographic shift towards a minority-majority society.

“We passed the 14th Amendment centuries ago, but this may be the first time that an almost fully en­franchised nation is seeking to define what equality and equal citizenship really mean — not just as for­malities but substantively,” she says. “I think that the Capitol riots and election fraud narratives reveal a deep discomfort with definitions of equal citizenship that allow people of color to be the deciding votes for changing the nation in ways some European-Ameri­cans oppose.”

Seeing fellow citizens as enemies is a threat to democracy, Coleman says, because it can lead people to a point where, rather than share power with those with whom they disagree, they’d prefer to surrender their power to a strong leader or a strong judiciary. So long as those entities promise to suppress the “enemy,” citizens will disregard the costs to their own autonomy, she says.
“Fear of the ‘other’ will cause us to give up our democratic decision-making power in order to keep our opponents from exercising democratic deci­sion-making power,” she says. “But that mindset can only lead to a nation that’s a judicial oligarchy or elected dictatorship rather than a true democracy. To me, that outcome is what we should fear, not our neighbors.”

Because absentee and mail-in voting have grown in popularity, controversies about their proper role in the electoral landscape are likely to persist in both legislatures and courts, says Robert Yablon, an as­sociate professor who studies political and election law, constitutional law, federal courts, and statutory interpretation.

Before the election, federal courts declined to weigh in on those challenges or determined that those voting mechanisms are privileges rather than rights. “And so as long as a state is providing enough of an opportunity to vote in person on election day, state officials can argue that providing those other mechanisms really is a discretionary decision,” he says. “Given what we saw from the federal courts in 2020, I don’t think that you’re going to see them jump in and recognize broad constitutional rights to vote absentee or by mail.”

On the flip side, Yablon says states that expand absentee or mail-in voting rights may face court challenges of their own. “One question is whether election administrators on their own are authorized to engage in those expansions or whether it’s some­thing that has to come from the state legislature,” he says.

Yablon says the federal courts also seemed unwilling to intervene after the election and had little appetite for the dozens of challenges that were brought to challenge the electoral results. “They didn’t want to play that role,” he says.

Social Media Under the Microscope

Yablon says one issue to watch in the wake of the in­surrection at the US Capitol is whether social media companies reform their platforms in ways that are “more likely to advance democracy and democratic discourse rather than create problems.”

There could be some attempts at federal reg­ulation, though that would be constrained by the First Amendment, Yablon says. Another potential outcome could be broad anti-trust actions aimed at changing the market power of social media compa­nies, he says. Social media companies may also make internal reforms, such as Facebook’s move to create an “independent court” to rule on some content-re­lated issues.

“Some people think that isn’t enough and want these platforms to go even further,” he says. “Social media companies are certainly feeling the pressure to do more to moderate their content and to think about what kind of messages they’re amplifying.”

The Supreme Court gutted Section 5 of the Voting Rights Act in 2013, shortly after Steven Wright left his post in the US Justice Department, where he spent five years working on voting rights litigation. The law had required jurisdictions in Southern states to request permission before making changes to voting laws. “I became an expert in the law that no longer is on the books,” says Wright, a clinical associate professor.

While new legislative proposals to replace the act address more modern means of voter suppression, such as strict voter ID requirements, that weren’t contemplated in 1965 when Section 5 was passed, Wright says “old-school type discrimination” is per­sistent, especially at the local level.

Wright wrote the 2020 novel The Coyotes of Carthage, set in South Carolina and based on his experience working on Section 5 cases. Low funding for local elections in some jurisdictions, combined with lack of full-time professional staff and extremely low turnout, makes them vulnerable to “shenani­gans,” he says.

“I’ve been to the elections where there’s only 4 percent turnout,” he says.

Wright says local elections will also continue to be targets for dark money from anonymous donors, which proliferated in the wake of the US Supreme Court’s 2010 ruling in Citizens United that lifted lim­its on political campaign spending by corporations and other outside groups. “The book deals with what happens when you go into a community where the average campaign budget is $2,000, but a corpora­tion wants to come in and spend a $1 million, which distorts the ability of people to make their case and get out their message.”

The recent House election reform bill requires super PACs and political organizations to make the names of their donors public. Legislation would be the most likely path to reforming campaign finance law, Yablon says.

“We have a Supreme Court that is very skeptical of campaign finance regulation and that is unlikely to change in the near term,” he says.

“I suspect that you may see more of that and it’s possible that you may see that trickle up to the state level, conceivably the federal level, although that might be a heavy lift politically,” Yablon says. “I don’t expect us to overhaul our campaign finance system anytime soon.”

Wright is somewhat optimistic that the rise of populism could bring about progress on campaign finance reform. “There are a lot of people who very much feel that the system is rigged. And campaign finance, I think, is at the heart of that conversation,” Wright says.

Despite the conflict and division, Coleman is also optimistic.

“I do think that there is hope for the future, if we are willing to leave some disagreements to the legis­lative process rather than relying on judicial musical chairs ,” she says. “Each generation is growing up more exposed to difference than the previous one, and I think we can trust them to reach the legislative compromises we could not.” •