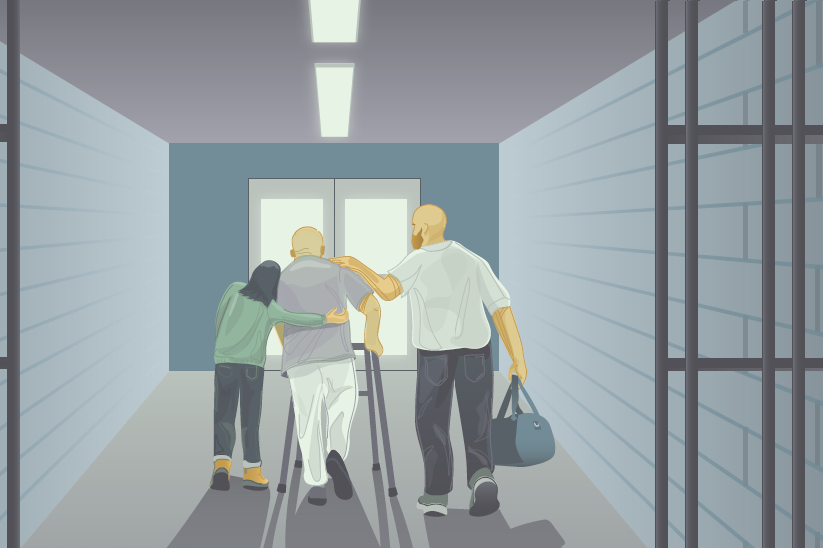 “I have to grapple with the fact that I come into my clients’ lives only because they are dying,” says Mckenna Kohlenberg.

A third-year UW Law student, Kohlenberg represents incarcerated people seeking compassionate release, a mechanism for early release from a prison sentence based on a serious or terminal medical condition. She is enrolled in the Law School’s Legal Assistance to Institutionalized Persons (LAIP) project, one of only a few clinical legal programs in the country that tackles compassionate release cases. Her advocacy can mean the difference between a client with terminal illness dying alone in prison or dying at home among loved ones.

According to Renagh O’Leary, a clinical law professor who leads LAIP’s compassionate release work, freeing incarcerated people who are very sick or dying is the humane thing to do.

“Compassionate release laws give judges a chance to take a second look at a prison sentence. When someone in prison receives a life-changing diagnosis, their sentence can become wildly disproportionate. A terminal illness can turn a two-or-three year sentence into a life sentence,” says O’Leary.

Wisconsin, along with 48 other states and the District of Columbia, have compassionate release laws. The laws are so common, says O’Leary, because the justifications are compelling.

“At the most basic level, it is about compassion and alleviating suffering,” says O’Leary. “Compassionate release is also pragmatic. People who have six months to live or are too weak to feed themselves are not a public safety risk.”

Most of LAIP’s compassionate release clients have received serious or terminal diagnoses, like cancer, heart disease, or other illnesses with a dire prognosis. Clients may be undergoing chemotherapy, radiation, major surgery, and other grueling treatments that require care beyond what the prison infirmary can provide. These treatments often require going back and forth between the prison and community hospitals.

“Our compassionate release clients want what all of us want: to spend their final days surrounded by the people they love. They want a chance to say goodbye and make things right. But people who die in prison die alone. They spend their final days in the prison infirmary or maybe in a community hospital, where they are shackled to their hospital bed and monitored by two prison guards who are keeping watch 24 hours a day.”

The clinic has represented clients as young as their early twenties and people into their eighties. Some are serving relatively short sentences and others are serving a sentence of decades.

Advocating for the sick and dying

Because compassionate release cases are urgent by their nature, they often span just a few months from start to finish. The accelerated time frame means LAIP students can often be involved every step of the way, from research and client interactions to making arguments before the court.

For students assigned a case, the first step is research, which entails requesting and pouring over medical records, understanding how the medical condition affects their client’s day-to-day life, and creating a strong release plan. They meet with their client multiple times in person and communicate on a regular basis via phone and letters. Gathering in-depth information is essential for building a compelling case for compassionate release, says Kohlenberg.

“I become not just a legal advocate, but also a translator of complex medical conditions and records; a communicator between my client, her family, her social worker, and her supervision agent; and a confidante and source of support as my client goes through something unbearable,” says Kohlenberg.

Students spend weeks drafting, revising, and mooting their statements and anticipating why a judge or district attorney would push back.

All the meticulous advance preparation improves the chances of a successful hearing before members of the Department of Corrections (DOC) committee, where students argue that releasing their client serves the public interest. This opportunity for advocacy is a powerful experience for law students. It’s also an emotional challenge — both for the student and client.

“I warn my client in advance of the hearing that the statement I read will be very hard for her to hear, because I’ll have to emphasize that she is destined to die within the year,” says Kohlenberg.

If the DOC committee unanimously sides with the client, students immediately begin preparing for the final step of litigating for their client before the original sentencing court, which is the circuit court in the county where the client was originally sentenced.

“It’s the culmination of months of hard work; it’s the adrenaline of doing something new and being in a position where I can have real influence. It is really my chance to advocate for a client who I believe deserves to have the opportunity to be released and to say goodbye to her loved ones,” says Kohlenberg.

Seeing students like Kohlenberg win compassionate release for their clients is a remarkable experience, says O’Leary. And the work they do fills a growing need not only in Wisconsin, but across the country.

Without meaningful reforms, O’Leary says the need for compassionate release will only escalate. Prisons are “graying” with increasingly older populations, creating significant demands on prison healthcare systems. Since 2007, the number of people aged 65 and older serving sentences in state and federal prisons has doubled, according to data from a 2015 Human Rights Watch study. This steady increase in older inmates with complicated health needs has led some states to build special facilities. New York and California, for example, have special units for prisoners with dementia, while Washington has built assisted living units. Nine states, including Wisconsin, have built designated prison wards within community hospitals to house a growing number of people who need medical care that a prison infirmary can’t provide.

“Prison healthcare systems are simply not designed to treat this many people with serious health problems,” says O’Leary. “Across the political spectrum, there’s growing interest in compassionate release as a way to reduce the number of older people and very sick people in prison.”

Mechanisms for compassionate release exist in most states, yet few prisoners actually receive the benefit. In the United States, 216 people were granted release in 2015, out of a prison population of 2.3 million, according to a Milwaukee Journal Sentinel report. Annually, most states have released inmates in the single digits. In Wisconsin, about five people per year have been released since 2012, out of a prison population nearing 25,000.

The reason, in part, is because relatively few people who are eligible for compassionate release apply, says O’Leary. Most people who meet the medical criteria for compassionate release aren’t aware it is even an option. And for those who are aware, the process of applying — especially in combination with declining health — can be daunting, says O’Leary.

“The people who need compassionate release are dealing with serious health problems and all the emotional upheaval that brings. The prospect of coordinating multiple affidavits from doctors, writing a petition, and representing themselves in a hearing can be completely overwhelming,” say O’Leary.

O’Leary hopes to see more attorneys take on compassionate release cases, not only to address the unmet need, but because the work itself is so rewarding.

A reckoning with mortality

That’s something her students have come to appreciate about compassionate release cases, as well.

There is something very poignant about compassionate release work, says Kohlenberg.

“There is a moment when defense counsel, the state, and the judges come together and agree that the very sick prisoner before us is — most fundamentally — just a very sick person, who no one ever intended to die alone in prison, who is reckoning with her own mortality in a way few of us probably ever will,” says Kohlenberg.

Compassionate Release in a Pandemic

Calls for compassionate release gained ground over the past months, due to concerns over the spread of COVID-19. Some have called jails and prisons, with their dense populations and unsanitary conditions, the perfect incubators for the coronavirus.

Two of the most oft-cited ways to minimize the spread of COVID-19 — physical distancing and good hygiene — are nearly impossible for those behind bars or working in correctional facilities. With limited health care capacities, the inadequacy of prison health care resources puts incarcerated people at greater risk if they do contract COVID-19, especially the elderly or those with pre-existing conditions.

While the pandemic has raised questions about incarceration and underscored the need for compassionate release, it has also made the clinic’s work incredibly challenging. Students and faculty are now working remotely, meeting via videoconference or phone. For most proceedings, courts across Wisconsin are operating remotely.

Despite this, O’Leary says the clinic has ramped up compassionate release work in response to the pandemic.

In late March, as the rate of infection was quickly escalating in Wisconsin and stay-at-home mandates were put in place, two students successfully gained release for their client, a woman in her 50s with end-stage pancreatic cancer.

“Even amidst all the disruption to their own lives caused by COVID-19 and the shift to remote instruction, our students were zealous and effective advocates for our client,” says O’Leary. “Our students’ dedication to serving our incarcerated clients is inspiring.”