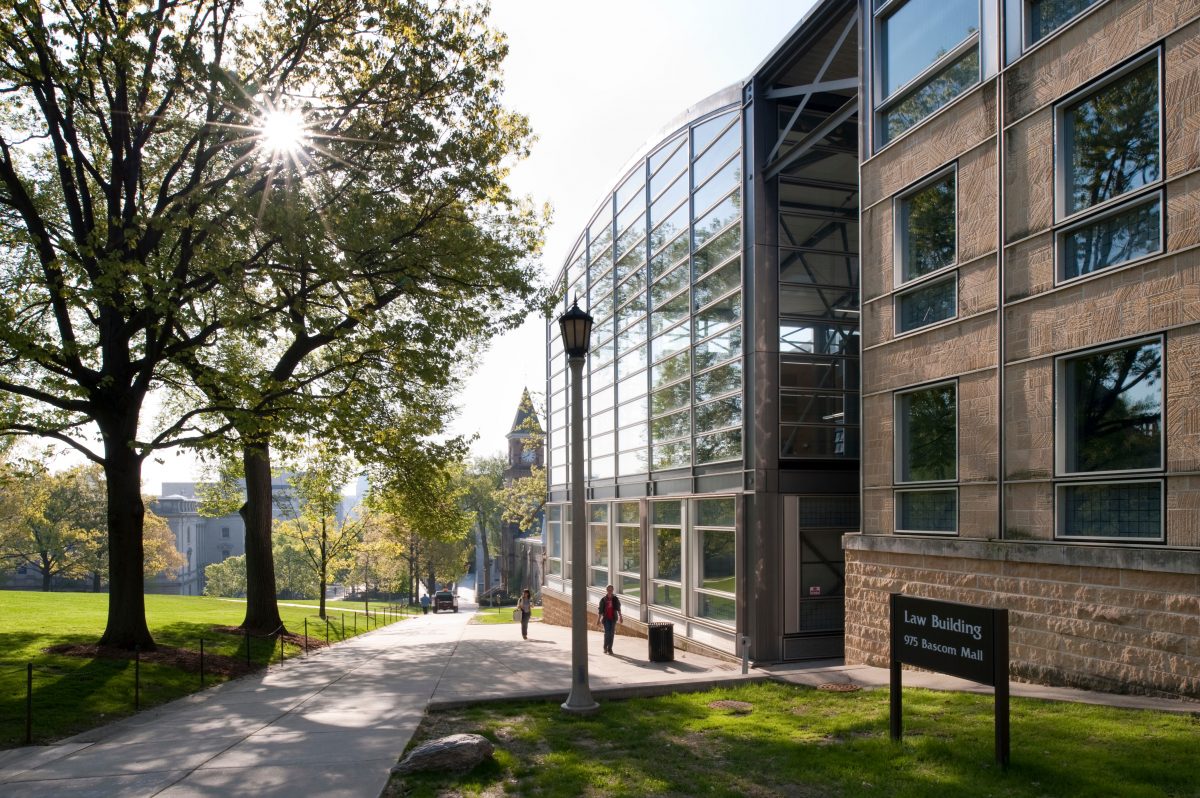 For more than 150 years, the University of Wisconsin Law School has trained lawyers to be agile and responsive to the real world. Never were the benefits of its law-in-action focus more evident than in 2020, when COVID-19 suddenly upended life worldwide, including at UW–Madison. At the Law School, the public health crisis disrupted everything from admissions to graduation, from teaching methods to career prospects. Here are just a few examples of how the UW Law community rallied to meet the challenges of this extraordinary time.

During a typical year, Law School applications would close on April 1, and spring would find Assistant Dean of Admissions Rebecca Scheller in heavy recruiting mode, hosting admitted students and considering her wait list. This year, the application deadline was extended to May1, and recruitment efforts moved online.

That meant many applicants missed out on campus visits, which are often key to a student’s decision. “Many of our applicants have never been to Madison,” says Scheller, who tried to showcase the city through a webinar campaign instead. “That’s been probably the biggest hardship of the admissions process.”

In lieu of the usual Admitted Students Weekend, students were invited to the Wisconsin Law Admit Virtual Experience, which featured alumni and student panels, a financial aid webinar, and a mock class with Assistant Professor Yaron Nili.

Although it’s too early to know how COVID-19 will affect the size and composition of upcoming classes, Scheller received some earlier-than-normal requests for deferrals from students who were already accepted, along with increased interest from students who are now considering law school instead of taking a gap year or going into the workforce as planned. “Sometimes higher education is a bit of a safe haven when the economy isn’t great,” she says.

Law schools nationwide are facing the same challenges, notes Scheller, who served on the Law School Admission Council’s Board of Trustees. “The advantage we have here is that we’re part of a large university and an older, well-established law school that has a worldwide brand. We’ll be able to weather this storm. There are some other schools that might be affected more deeply.”

As the economy ground to a halt and offices closed to comply with Wisconsin’s Safer at Home order, UW Law students and graduates found themselves facing an uncertain employment outlook. Many summer jobs were canceled, though some employers moved the positions to remote work. “Employers are trying really hard to give students at least some sort of experience,” notes Megan Heneke, director of the Law School’s Office of Career and Professional Development.

To fill the gap for students still looking for a summer experience, the Law School expanded its usual handful of summer research positions to accommodate approximately thirty-five students. “That’s a win-win-win,” she says. “It’s a benefit for professors who normally don’t get that kind of help in the summer, and it gives students a valuable research experience.”

Normally Heneke would be gearing up for the 2021 job search: holding workshops to prepare students and inviting employers for on-campus interviews. Instead, the Law School shifted its Fall On-Campus Interview Program from August 2020 to January 2021.

“Most law schools across the country have moved to pass/fail grades, and we want to give law firms the chance to assess students under more normal circumstances,” she explains. “We’re also hoping that firms will have a better sense of their own situation by then. The last thing we want is to have employers give students offers that they can’t follow through on.”

For law students who are planners, the uncertainty has been challenging. “What gives me hope is that students have been very adaptable and resilient, and I’m very proud of them for that,” Heneke says. “They had spring break to adjust to the idea that we were going to go to alternative delivery of classes, and they started immediately and are doing the best they can. If they can treat their job search with that same kind of resilience, they’ll be OK.”

The Law School’s Information Technology team was on the front lines of the efforts to shift the Law School’s community of 900-plus students, faculty, and staff to remote learning, teaching, and work. It was a dramatic change for a law school that had never before offered courses online.

“We’re doing the best we can without a road map in front of us,” says Director of IT Eric Giefer, who worked nineteen days straight during the initial transition period.

“With faculty, we mostly focused on the minimum they’d need to survive for the last month or so of classes,” Giefer says. “They wanted to do a lot more, but they only had a little bit of time to prepare.”

Some faculty were excited to discover new tools and approaches that they might continue to use even after campus reopens. “It intrigues some of the faculty, and they are thinking about whether technology can enhance their face-to-face instruction,” he says. “Like the flipped classroom concept, where pre-re-corded lectures are put online and the classroom becomes more of a discussion forum, hopefully allowing for a deeper understanding of the subject matter.”

Although the Law School’s IT help desk was busier than ever, facing questions they’d never dealt with before, people were patient. “The community was great about letting us focus on instruction first, except when they really needed assistance to even start doing their jobs,” Giefer notes. “I really appreciated how everyone came together to focus on the mission first.”

As the world grapples with the pandemic, a wide range of legal issues have been brought to the forefront. The expertise of UW Law faculty has been in demand as these complex issues develop.

In thirty years of teaching, Ursula Weigold never had a semester like Spring 2020.

“It was quite an adjustment. We had to get to know the new online teaching platform and make a lot of decisions about how to best adapt our teaching,” explains Weigold, who is the associate dean of experiential learning as well as the former director of the Legal Research and Writing Program. “But the students were so amazing. Despite having their law school experience turned upside down near the end of the semester, they were flexible and cheerful. That made teachers’ jobs easier.”

Some professors held real-time classes, while others pre-recorded lectures and held online discussions and office hours. Professor Cecelia Klingele made the most of the need to teach her criminal procedure class remotely and homeschool her kids. She combined the two into a film production starring her children acting out a bail exercise.

The clinical programs had to adapt quickly, too: instead of working face-to-face, students had to communicate via video conferencing, email, and phone. The clinics’ low student-to-faculty ratio was a great strength because small-group work online was manageable.

“Even though it’s been a challenging time, it’s also an amazingly creative time, and our clinics and experiential programs are finding that we can be resourceful in ways that we never imagined,” Weigold says. “And that’s very invigorating.”

Some clinical professors also hope that this unusual time could pave the way for justice system reforms. Professor Mitch, the director of the Economic Justice Institute clinics, sees reason for optimism on access-to-justice issues. For example, it may be a hardship for clients to miss work, drive across town, and pay $10 for parking for a 15-minute hearing. “For so long, the response to trying new and different ways to make the justice system more accessible was that going online would never work,” says Mitch. “Now, people seem more willing and
able to consider future innovation and possibilities.”

Professor Sarah Davis, co-director of the Center for Patient Partnerships, agrees. “This crisis may well open some incredible policy reform windows,” she says, “and a lot of learning can come from those opportunities.”

A Different Sort of Commencement

When classes moved online, 3L student Taijae Evans was ready. “I finished my master’s degree online so when it was time for us to switch to online instruction, it was like riding a bike for me,” he says.

Still, he missed his classmates. “I’m a big extrovert, and you build those bonds during law school because you’re all going through it together,” he says. “We’re using Google Hangout and Zoom to make sure we can still lean on each other.”

Evans was selected by his fellow students to be one of their commencement speakers. But the ceremony also went virtual, with video speeches and slides featuring messages and photos of graduates. “One of the toughest things is we’ve all worked so hard and had these visions of what our final semester of law school would be like, going to the Terrace after class and being done with the hard part of law school,” he says. “A lot of people are really hurt about not being able to have a traditional graduation. To actually go through the hooding ceremony and walk across the stage has been a dream for many people, and the pandemic has taken that away from us.”

But Evans, who became a new dad in January, also focused on the bright side of his homebound final semester. “It’s given me a lot of time home with my son that I probably wouldn’t have had otherwise,” says Evans, a military veteran who will soon practice law in the US Navy’s elite Judge Advocate General’s Corps.

In the meantime, he thinks that UW Law students will be stronger for the experience. “We’re resilient, and we’re going to continue to work hard and figure out a way to get through this,” he says. “It’s definitely going to be an experience that we’ll never forget.”