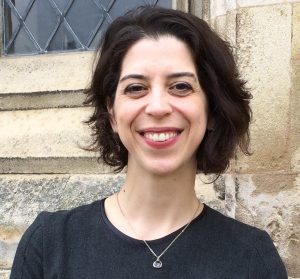 Sharafi will use the opportunities to work on her latest book project, “Fear of the False: Forensic Science in Colonial India,” a cross-disciplinary examination of Indian law and forensics under British rule.

“I’m trying to figure out what the history of science and medicine has to offer legal historians and vice versa,” Sharafi says. “We legal historians have much to learn from these other fields.” That intersection, she notes, is “fertile and exciting ground” for scholarly exploration.

Two of Sharafi’s fellowships are residential. Another provides funds for travel and research, and the fourth covers summer funding. All are highly competitive awards.

First, Sharafi is the recipient of the H. I. Romnes Faculty Fellowship, a UW–Madison award for recently tenured faculty. It will enable her travel to the United Kingdom and India to scour several archives for original source material.

Second, in the fall 2018 semester, Sharafi will join a select cohort of historians at Princeton University’s Shelby Cullom Davis Center for weekly seminars, collaborative interaction, and research on the theme “Law and Legalities.”

Third, for the 2020–21 academic year, she will take up residence at the National Center for the Humanities in North Carolina as one of the American Council of Learned Societies’ Frederick Burkhardt Residential Fellows.

Finally, Sharafi is the recipient of a 2018 summer stipend award from the National Endowment for the Humanities. This funding will allow her to write one chapter of the book manuscript during summer 2018.

Of her residencies, Sharafi says she’s “hoping to find the right balance of research, writing, and scholarly exchange to help me craft a book that advances an interesting and original argument.”

The book focuses on the period in India between 1840 and 1947, when many new institutions for forensic science were created.

“India’s experts in poisons, blood stains, handwriting analysis, and explosives were supposed to extract scientific truth in the service of a neutral vision of justice,” she explains. “However, I’m finding that India’s new forensic science generated complex and conflicting answers to questions like ‘what is truth?’ and ‘what is justice?’—particularly between legal experts and scientists, both British and Indian.”

Sharafi joined the Law School in 2007 and holds an affiliated appointment in UW’s Department of History. She is also part of UW’s undergraduate Legal Studies Program, and is associated with the Center for South Asia. Her first book Law and Identity in Colonial South Asia: Parsi
Legal Culture, 1772–1947, published in 2014, won the Law and Society Association’s J. Willard Hurst Prize for sociolegal history. •