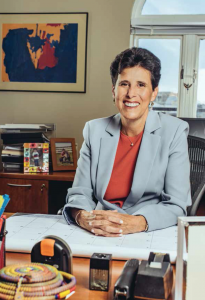 In the weeks following the Harvey Weinstein scandal, the hashtag #MeToo exploded on social media channels, as millions of women used it to share their stories of sexual harassment. Considered a watershed national reckoning, the movement exposed just how prevalent sexual harassment is in the workplace.

Long before the #MeToo hashtag was trending, alumna Debra Katz ’84 began fighting for justice for victims of harassment. Katz is at the forefront of sexual harassment litigation. Included in her high-profile caseload are clients who faced harassment at NPR and who reported sexual abuse at Harvey Weinstein’s company, as well as Michelle Manning Barish, one of four women who have accused Eric Schneiderman, the newly resigned New York attorney general, of physical abuse.

While this movement has amplified her career- long efforts, Katz has been steadily working
toward change for decades. As she works to leverage this moment of societal change into systemic improvements, her goals remain the same: to truly improve workplaces for the better, to improve conditions so all employees have the power to come forward, and to encourage companies to take better measures to protect employees.

Just as important to Katz: speaking up, especially on behalf of those who might not have a voice in the conversation. Regularly featured in The New York Times, NPR, and The Washington Post, Katz feels that part of her role as a civil rights lawyer is to advocate for all victims of harassment, in part by taking a public stand.

Whether penning an op-ed arguing for victim rights, attending a protest, or making legal services more accessible, Katz is determined to do all in her power to make a difference for victims of harassment and discrimination.

It’s a long-held conviction. Going into law school, she knew she wanted to be a civil rights lawyer and focus on women’s rights issues. Mentored by Professors Frank Tuerkheimer, Carin
Clauss, Susan Steingass, and Ben Kempinen, Katz says her legal education equipped her to become a powerful advocate and activist—and her advocacy started while she was still a student at UW Law. As a member of the Wisconsin Law Review, she was deeply concerned that there wasn’t a single African American member.

“The Law Review was all white. There was lip service given to valuing diversity, but in practice,
students of color were excluded from participating,” says Katz. “After arguing unsuccessfully for the need to revamp selection criteria to be more inclusive, I resigned and co-founded the Women’s Law Journal. It provided a place where students from different backgrounds were able to participate and focus on issues of discrimination, including race and gender.”

After law school, she received a fellowship at Georgetown to work on women’s law and public policy, where she was assigned to work at a nonprofit in the DC area that focused on women’s rights issues.

She worked on Meritor Savings Bank v. Vinson, a landmark case before the US Supreme Court that recognized sexual harassment as a violation of Title VII of the Civil Rights Act of 1964. The court, for the first time, made sexual harassment an illegal form of discrimination.

“It was an unparalleled experience. I got to work with the greatest women’s rights lawyers of the time, including Judith Lichtman ’65, the executive director of the Women’s Legal Defense Fund. We won the landmark decision 9–0 establishing that sexual harassment was a form of unlawful sex discrimination,” says Katz. “That really launched my career as a women’s rights advocate.”

Her firm, Katz, Marshall & Banks, focuses on discrimination and whistleblower law. With a reputation for securing wins for clients, the firm is in high demand, which unfortunately means they have to turn down many meritorious cases. On the other hand, the firm will also take on clients even if there isn’t a legal claim, if they believe their cause can
have significant impact.

“Sometimes people come to us and because of the time that has passed, there isn’t a legal claim, but they have an important story to share,” says Katz. “In those cases, we may help them to be empowered to share their story. When a story like this becomes public, it in turn empowers other people to come forward and shatters the type of silence that has allowed workers to be harassed and abused with impunity.”

That phenomenon—where one person shares their story, emboldening more to follow suit—has played out time and again in this #MeToo moment. And while the celebrity cases dominate the news, Katz is seeing an overall shift in which women are coming forward because they feel they are more likely to be believed. In that vein, Katz filed a high-profile lawsuit against DC celebrity chef Mike Isabella, which was recently settled.

“There is less of an effort by employers to conduct smear campaigns about the victim and a greater receptivity to change. We see cases resolving more quickly and for higher dollar amounts than before,” says Katz. “Because of the #MeToo movement, there is much more awareness about how prevalent and damaging sexual harassment is. We are also now seeing that CEOs and other powerful people are being fired.”

It’s all part of the post-Weinstein effect: companies fear being the poster child for the next big harassment case, says Katz. Like Miramax and Weinstein’s spin-off company, The Weinstein Company, many businesses employ non-disclosure agreements that have in effect silenced victims. How pervasive non-disclosure agreements are and the extent to which they prevent victims from complaining about workplace abuses is just coming out now, says Katz.

“Many companies require employees to sign agreements that restrict their capacity to report sexual harassment,” says Katz. “With Weinstein, people reported being scared of how powerful and violent he was, and then on top of that, individuals were scared of coming forward because of threat of legal action against them.”

While much of the media coverage has focused on Hollywood and media outlets, harassment
extends across all industries. Katz says that sexual harassment is about the abuse of power, and people who are the most vulnerable economically are hardest hit, especially those living paycheck to paycheck.

“Workers are being left behind in this conversation, especially in low-paying sectors, like the
service industry and agriculture,” says Katz. “I am deeply concerned about undocumented workers who are vulnerable to wage theft, rape, and other indignities, who can’t afford to report it because they may be apprehended by ICE at the courthouse.”

To address these issues for all workers, legislative changes are needed that reflect the current environment, including online harassment and overuse of non-disclosure agreements, says Katz. While current political realities may make legislative change an uphill battle, Katz continues to advocate with lawmakers.

“For sexual harassment to be eradicated, we need reasonable laws that protect employees,” says Katz. “It is a very difficult time on Capitol Hill to make changes, even though the general public is aghast.”

But she believes the #MeToo momentum and the court of public opinion is making change at the workplace level more feasible. When it comes to “Many companies require employees to sign agreements that restrict their capacity to report sexual harassment.”

When it comes to eliminating sexual harassment in the workplace,Katz says the first step for employers is understanding how pervasive the problem is. Increasingly, employers are conducting focus groups and climate surveys to get a sense of what problems employees have experienced and to begin identifying and firing serial harassers. Change will require more than just checking boxes, like requiring employees to watch a sexual harassment video, she says; it is about creating a workplace culture that takes harassment seriously and respects the rights and dignity of all workers.

“Employers should provide robust in-person training and give employees multiple avenues for reporting harassment, including anonymous reporting, or being able to report to anyone with a supervisory role. This matters because if the supervisor is the harasser, or has human resources in their pocket, people won’t come forward,” says Katz.

However, the recent ruling for Epic Systems v. Lewis, which allows employers to avoid class actions through mandatory arbitration agreements, may be a step back for not only the #MeToo movement, but for employee rights in general, says Katz. She expects the ruling will prevent workers from bringing claims, as class actions are often the only way that most employees can wage legal battles against corporations.

Fighting for accountability, one client at a time

Despite the recent Epic ruling, employer accountability is something her individual clients are committed to as well. Given that harassment can be pervasive in a workplace—not necessarily limited to one person—her clients may be in positions to demand remedial actions that the employer must agree to as part of a settlement, Katz explains.

“These remedial actions are one way to seek employer accountability and require the employer to take meaningful steps to rectify, and hopefully prevent, harassment issues in the future,” says Katz.

As Katz continues to build upon the momentum of the #MeToo movement, she is also bracing herself for fallout.

“My concern is the backlash. And there will be one. My hope is that this movement has educated the public—and judges as well—that there are real reasons that people fear coming forward, and that judges will look at harassment cases with new eyes,” says Katz.

She’s found that many courts have not been receptive to harassment claims. Cases are kicked out all of the time on summary judgment because the claim isn’t considered “severe or pervasive” enough to qualify as a hostile environment, says Katz. For example, a claim may be rejected because the reported number of propositions isn’t considered to be “pervasive enough” by a particular judge.

Ultimately, though she has borne witness to harrowing stories of sexual harassment and abuse, Katz is hopeful. Young people give her hope, she says, because they are engaged, organized, and not going to let issues of discrimination go. The resistance is not going away, says Katz, and she is committed to being part of it.

“When I go to a march on behalf of Dreamers, I hear young people making connections between DACA and Islamophobia. I hope that energy continues, to retake our democracy that is truly at risk now,” says Katz. “To see students marching, protesting, and to see the response to Parkland, it all gives me hope.”