The work I’m doing affects so many people. That’s something I never forget. Someone wins … and someone loses. That burden feels very heavy to me.” 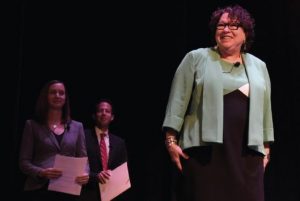 Center for Patient Partnerships, along with Other Health Organizations, Launched a Patient Insight Website, healthexperiencesusa.org, designed to help patients and doctors around the country learn about the experience of patients with various diseases. The website focuses on patient insights on depression, and may later address other topics such as chronic pain or pediatric cancer.

Professor Asifa Quraishi-Landes Won the Marygold Melli Achievement Award, given annually by the Wisconsin-based Legal Association for Women. The award recognizes extraordinary achievement in the legal profession, including contributions toward eliminating bias in the legal system and advancing women’s opportunities in the field. The award is named for Professor Emerita Marygold Shire Melli, the first woman to earn tenure at UW Law School.

This Fall, UW Law School Launched the Wisconsin Latino Exoneration Program, an initiative to help exonerate Latinos who have been wrongly convicted. Administered by the Wisconsin Innocence Project, the program is funded by a $633,000 grant from the US Department of Justice to undertake cases in which DNA testing can be used to prove innocence.

Professor Peter Carstensen Received Honors in the Best Merger Analysis Category from the Jerry S. Cohen Award for Antitrust Scholarship selection committee at the annual meeting of the American Antitrust Institute for his 2015 article, “The Philadelphia National Bank Presumption: Merger Analysis in an Unpredictable World.”

Megan McDermott Received the Warren E. Burger Prize for Writing from the American Inns of Court at a Supreme Court ceremony for her essay “Negotiating on Behalf of Low-Income Clients: The Distorting Effects of Model Rule 4.1.” 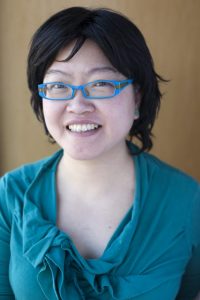 Professor Stephanie Tai Was Recognized for Excellence in Scholarly Writing by the American Agricultural Law Association for her article “Whole Foods: The Food Safety Modernization Act and the Challenges of Defragmenting Food Safety Regulation,” published in the American Journal of Law and Medicine in 2015.

Professor Tonya Brito Received the 2016 ‘Women in the Law’ Award Presented by the Wisconsin Law Journal. The distinction is given annually to women who have achieved excellence in their legal careers and who have influenced other women to pursue legal careers. Along with Brito, eight UW Law alumnae received the award: Johanna J. Allex ’00, Ana Berrios-Schroeder ’95, Marilyn Crowley ’86, Meg Pekarske ’00, Rhoda Ricciardi ’97, Amanda Riek ’11, Ellen Thorn ’84, and Nancy Wilson ’02. 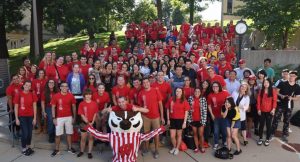 At orientation last fall, the new entering class participated in a day of community service, followed by a picnic with Bucky. Photo by Mike Hall 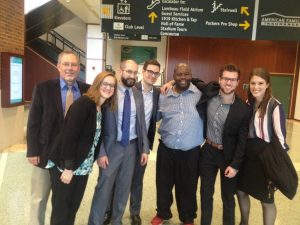 A Wisconsin Innocence Project Client Is Freed after Serving 24 Years for a Wrongful Conviction.

Daryl Dwayne Holloway walked out of Green Bay Correctional Institution a free man after serving 24 years in prison for crimes he didn’t commit. A Milwaukee County Circuit Court judge signed the order freeing Holloway in October, after prosecutors in the Milwaukee district attorney’s office agreed that exculpatory DNA results warranted the reversal of Holloway’s convictions in a 1992 sexual assault case.