The television streaming service Netflix begins promoting a documentary series about a Wisconsin man wrongfully convicted of rape, released from prison, and then charged and convicted for the death of a young photographer. Keith Findley isn’t sure how long it took viewers of Making a Murderer to react — maybe a few days, a week at most — but he and his colleagues were shocked by the phone calls, letters, and emails that soon flooded into the Frank J. Remington Center’s Wisconsin Innocence Project at UW Law School. “I was completely blown away by the splash it made,” Findley says. “I never expected it to get that kind of attention.” 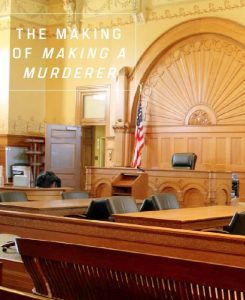 Findley began his studies at Yale Law School in the early 1980s, determined to do public interest work. Upon graduation in 1985, he joined the clinical faculty at UW Law School to help educate law students and serve the indigent who find themselves caught up in a sometimes unjust criminal justice system.

During his time with the Law School’s Legal Assistance to Institutionalized Persons Project and the state public defender’s office, increasingly sophisticated DNA testing began to show that the justice system was more error prone than previously imagined, and Findley took note.

Recognizing that innocence cases usually involve the most serious crimes, but also require tremendous resources, he and fellow professor John Pray created the Wisconsin Innocence Project (WIP) in 1998. WIP was one of the first programs of its kind, and has since become a national leader in innocence work.

One of its earliest cases was that of Steven Avery, a Manitowoc County, Wisconsin, man convicted for rape in 1985. He’d already served 15 years when he asked WIP for help.

“His original case raised a lot of eyebrows because it wasn’t clear the outcome was accurate,” Findley explains. “By the time we got the case, DNA technology had improved, and other things could be tested. When DNA results came back, everyone agreed this was absolute innocence, and he was set free.”

News of Avery’s case was met with surprise and anger over his wrongful imprisonment. State lawmakers, police, judges, prosecutors, and defense attorneys convened a task force (named after Avery—at the time the new face of the innocence movement) and crafted reforms aimed at reducing the risk of similar mistakes. “There was incredible interest and energy invested in trying to make the system better,” Findley says.

The Avery Bill, now known as the Criminal Justice Reform Bill, included best practices for eyewitness identification and called for improved DNA evidence preservation and priority testing in post conviction cases, as well as a requirement to electronically record all interrogations.

The state legislature passed the bill on October 31, 2005.

Halbach’s remains were eventually found on the Avery family property, and within the month, Avery was arrested and charged with first-degree intentional homicide and mutilating a corpse.

“The rush to judgment was overwhelming. Everyone was willing to conclude Avery was guilty before there was a trial, and to vilify anyone who helped him in the past, including us.”

Avery’s eventual conviction in Halbach’s death was also a blow to the innocence movement. Findley remembers support for improving the state’s justice system all but evaporating by the end of 2005, save for two graduate students from Columbia University’s film program, who reached out to WIP for a reaction to Avery’s case.

When Making a Murderer filmmakers Laura Ricciardi and Moira Demos initially contacted Findley, he recalls wishing they would just leave the Halbach family alone. “It was an emotionally difficult time for everyone involved. The outrage was so intense, it felt like any additional publicity could only be bad. I agreed to participate only because I wanted to make sure the story they told was accurate.”

A year-and-a-half later, a jury found Avery guilty of murder and illegally possessing a firearm. In June 2007, he was sentenced to life in prison without parole. His nephew, Brendan Dassey, was convicted of helping Avery murder Halbach, and he was also sentenced to life.

After the trial, Findley assumed, as had been the case with many journalists and filmmakers who’d reached out to his office, that Ricciardi and Demos would either never finish their project—or it would collect dust after a handful of viewings.

BINGE WATCHED AROUND THE WORLD

Findley — who today serves as WIP’s faculty director — was astonished when he heard that Netflix had not only picked up the series, but that it was 10 hours of programming, something he describes as unheard of for a film about criminal justice and the innocence movement.

Following in the popular true-crime footsteps of HBO’s The Jinx and the first season of the Serial podcast, Netflix promoted the series as a saga full of unbelievable twists and turns. All 10 episodes were made available on December 18, 2015. Though Netflix does not officially reveal its viewership, AdWeek reported that an independent data-collection firm estimated that 19.3 million people watched the series in a little more than one month.

Many of those viewers quickly formed their own unwavering opinions about Avery’s guilt or innocence. More than 129,000 people signed a petition asking the White House to pardon Avery. It took very little time for the passionate viewers to contact WIP. Findley says despite what he calls a fairly minor role in the documentary, WIP was bombarded with media requests and emails from people all over the world.

“I was stunned,” he says. “I never expected the series to get that kind of attention.” He describes the tone as a total reversal from the public sentiment 10 years earlier. Then, “there was complete outrage we’d ever helped Avery,” he says. “After the documentary came out, the reaction was the exact opposite: complete outrage he’d been railroaded, again.” Some people were grateful for WIP’s role in Avery’s release in 2003; others were angry that the project would not take up his cause now.

Former students and others connected with UW Law School also reached out to say they were proud to be connected with WIP and were excited to see the program represented in the series.

“The response reconfirmed in my mind that we need to stay true to our principles and do what we do, regardless of how the public might react,” Findley says.

WIP has not had a relationship with Steven Avery since his arrest for the Halbach murder in 2005, when he retained new counsel to represent him in that case.

But the program’s influence on the innocence movement is impossible to understate, and two major players in Avery’s case have strong ties to WIP.

Dean Strang, one of Avery’s lawyers in his 2006 trial, and a fan favorite from the documentary, serves on WIP’s advisory board.

WIP cannot comment on what’s next for Avery, other than to speak broadly on the process of innocence work. Findley can say only that theoretically, there are options available for challenging old convictions if new evidence emerges, or if it becomes clear there were previously unknown constitutional violations.

Findley will, however, elaborate on how something like Making a Murderer changes the public’s opinion of the criminal justice system. “Millions of people are talking about this documentary now, but discussion is not enough,” Findley wrote earlier this year in an opinion piece for The Washington Post. “We need to take a hard look at our criminal justice system — a much harder look than a 10-episode documentary allows.”

Findley is wary when he hears viewers drawing firm conclusions about guilt or innocence, knowing very few people have full access to all the information in a given case. The real value of a series like this, he says, is raising awareness that the criminal justice system “is a human enterprise, and therefore flawed and susceptible to error.”

“A rush to judgment,” he adds, “is a very dangerous way to deal with criminal justice.”

Some have criticized Making a Murderer for being too one sided in favor of Avery and his family. Findley believes it’s impossible to tell a story without sharing some of one’s own perspective, and that there’s value in showing what it feels like to be accused, and how it affects family and friends. And when it comes to increased media attention for those who have been proven innocent after a conviction, he says being able to share stories from a human perspective has given the movement renewed energy.
Findley believes the tale of crime-fighters catching bad guys and locking them up remains the dominant narrative, so it takes stories of real people with real lives to deepen the public’s understanding that the system is flawed.

“We need to be fair and smart,” he says, “and approach things carefully and with an open mind.”

WHATS NEXT FOR THE WISCONSIN INNOCENCE PROJECT?

Keith Findley says that WIP is working on multiple fronts, from legislation to best practices for interrogation to compensation for wrongly convicted people, and it continues to work on cases involving DNA evidence.

WIP is also fast becoming the national authority on cases of shaken baby syndrome and abusive head trauma. Findley, co-director Carrie Sperling, and clinical instructor Kate Judson are nationally
recognized experts who have consulted and written extensively on the topic. Findley says that the medical hypothesis used to constitute guilt is dubious and that research shows that a host of accidental and disease-oriented processes can cause the same symptoms as intentionally causing these brain injuries. It’s dangerous, he says, to conclude a crime was always involved — possibly tearing already-grieving families apart.

“The polarization, the tension, and the conflicts are intense,” Findley says. “There are possibly thousands of people who were wrongfully convicted of crimes such as shaken baby syndrome, and we’re working with others around the nation to address that.”