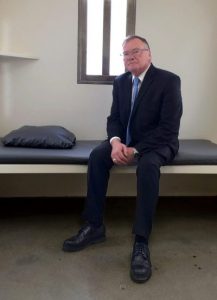 On January 23, 2014, Rick Raemisch ’88 was led, handcuffed and shackled, to a solitary confinement cell in the Colorado State Penitentiary.

Inmates can wind up in solitary for a variety of reasons — anything from getting caught with contraband to fighting with another inmate to throwing food at prison staff. Some are isolated for gang activity. Many suffer from mental illness, which can make them more likely to violate prison rules.

Raemisch, however, volunteered for his sentence. As the new executive director for the Colorado Department of Corrections, he was put in charge of reforming segregation practices in the state’s prisons. He wanted to “walk the talk,” he says, so he spent the night classified as an RFP, which stands for Removed From Population.

For inmates, RFP is isolation in the extreme: 23 hours a day in a 7-by-13-foot cell with no books and no television or personal property of any kind — only a bed, a toilet, and a sink. During his confinement, Raemisch reported losing all sense of time and beginning to feel “twitchy and paranoid.”

“It wasn’t sensory deprivation, like I expected. It was sensory overload,” he recalls. “You can’t see much when you’re in Administrative Segregation, or Ad Seg, as we called it, but you hear a lot. You hear the banging and the pounding and the screaming, and it’s relentless.”

Raemisch’s self-imposed lockdown lasted twenty hours, allowing him to experience all three shift changes at the prison. By contrast, inmates in Ad Seg often had no idea when they’d get out; some remained there for decades.

Raemisch would later write about the experience in The New York Times, “For a sound mind, those are daunting circumstances. But every prison in America has become a dumping ground for the mentally ill, and often the ‘worst of the worst’ — some of society’s most unsound minds — are dumped in Ad Seg.”

THE WORST WAY TO GET A JOB

Raemisch, a UW Law School graduate, oversees the operation of twenty Colorado prisons and more than a dozen parole offices. When he joined Governor John Hickenlooper’s cabinet, the state had set plans in motion to radically reduce its number of Ad Seg prisoners.

Colorado’s former prisons chief, Tom Clements, had in fact cut the total number by half. He had also begun rethinking how prisons provide treatment to mentally ill inmates.

Then, in what Raemisch calls “an absolute perfect storm of circumstances,” the unthinkable occurred. “My predecessor was assassinated,” he says. “I can’t imagine a worse way to get a job.”

Clements had been murdered in his home, allegedly by a parolee who had spent much of his sentence in solitary confinement. Raemisch explains: “An inmate with an unstable past spent seven years in segregation and was released from solitary directly into society. He behaved himself for a little while. Then he cut off the ankle monitor he was wearing as a condition of his release, and he got his hands on a gun.”

Parole officers failed to respond promptly to the tamper alert set off by the dismantled monitor. Meanwhile, it’s believed the parolee killed a pizza deliverer, stole his uniform as a disguise, rang Clements’s doorbell, and fatally shot him.

The murders, and the media scrutiny that followed, left the Department of Corrections in turmoil. Hickenlooper hired Raemisch to set it back on course.

Specifically, the governor wanted to continue seeing declines in the use of solitary confinement, especially for mentally ill inmates. He also wanted to substantially limit the practice of releasing inmates straight from solitary into the streets.

Raemisch had confidence in his credentials: in Wisconsin, where he was corrections chief from 2007 through 2011 under Governor Jim Doyle, he had pushed for similar reforms. And he had built a four-decade career in criminal justice, serving in such diverse roles as an undercover narcotics cop, deputy sheriff, prosecutor, and elected sheriff. Perhaps as importantly, he felt called to finish what Clements had started.

When Clements took the job as corrections chief in 2011, Colorado had one of the nation’s highest rates of inmates housed in Ad Seg — about seven percent of its prisoner population. These days, one percent of inmates reside in Ad Seg, making it the lowest rate in the nation, according to Raemisch.

The department has also capped solitary confinement sentences to one year. Raemisch maintains, “We believe that when inmates go in, they should know when they’re coming out. We’re the only state in the nation that has made that pledge.”

In moving away from its reliance on long-term segregation, his department is moving toward strategies that promote rehabilitation. Ad Seg inmates now make the transition out of restrictive housing through a series of “step-down” levels designed to ease them back into the general prison population, and eventually, their communities. Notably, Raemisch says that no Colorado prisoner has been released from Administrative Segregation directly to the public since March 2014.

Raemisch’s department also worked with Colorado legislators and the American Civil Liberties Union to pass into law the first-ever state ban on placing inmates with serious mental illness in long-term solitary confinement. As an alternative, two of the facilities he oversees are now dedicated to treating the mentally ill. In a new program he calls “10 and 10,” inmates diagnosed with mental illness receive 10 hours of out-of-cell therapeutic treatment and 10 hours of out-of-cell recreation per week.

“In my own mind, long-term segregation either manufactures or multiplies mental illness. With 97 percent of our inmates eventually returning to their communities, we shouldn’t be sending people home in worse condition than they came in,” he says.

“And by the way,” he adds, “if you don’t think people can change, this is not the business to be in.”

Raemisch says that, since the reforms were implemented, the department has seen its lowest levels of inmate-on-staff assaults in a decade. He’s quick to credit his employees for taking the actions necessary to meet department goals. “My staff lost their leader under tragic circumstances.They had to keep doing their jobs, in the face of intense criticism that was often unfair, and they didn’t have the chance to grieve. Working on segregation reform gave them something meaningful to focus on. I think it helped with their healing,” he says.

While Raemisch believes the new segregation policies make Colorado a safer place to live, he stops short of claiming that Clements, the former prison’s chief, would be alive today had current practices been in place at the time of the alleged killer’s release. And he makes no excuses for his department’s failure to respond promptly to electronic monitoring alerts. Instead, he has worked to understand and correct what went wrong before he arrived.

Raemisch notes, for example, that Colorado parole offices previously received thousands of false tamper alerts every month. “We’ve fixed that, along with fixing a number of other problems,” he says.

The determination that Raemisch brings to his current job is a quality he comes by honestly. A lifelong Wisconsin resident before moving to Colorado, he has roots in Dane County that go back more than a century.

After receiving his bachelor’s degree at UW-Stevens Point, Raemisch took a job with the Dane County Narcotics Task Force as an undercover drug agent.

He applied to UW Law School three times before he was accepted. As a part-time law student, he continued working full time in the narcotics unit and still managed to graduate with honors in 1988.

“I’d put in 60 or 70 hours on the job. Sometimes I’d work all night, come home to shower, and leave for an early morning class,” he says. “I wouldn’t recommend that to anyone.”

Fresh out of law school, he became a Dane County prosecutor, and later a federal prosecutor with the US Attorney’s office in Madison. But Dane County residents likely remember him best as their sheriff, a post he held from 1990 through 1997.

A self-described “law and order man,” Raemisch says he loved being sheriff. “What I didn’t enjoy was campaigning for sheriff. At the time, the term of office was two years, so you never really quit running for election, while at the same time you had to do your job.”

His experiences in the sheriff’s office would put his leadership skills to the test. He recounts, for example, a 1991 incident that took place shortly after he started the job. In a standoff that lasted 16 hours, inmates took a new deputy hostage during a jailbreak attempt. The deputy was eventually released with non-life threatening injuries.

In another high-profile case, a Mexican exchange student was brutally murdered in Dane County. Though a deliveryman was eventually charged in the teen’s murder, Raemisch learned that the Mexican media had been reporting that his agency hadn’t taken the case seriously because the victim wasn’t American. To the contrary, Raemisch took the allegation personally, he says; his own daughter was the same age as the victim.

The 20 hours Raemisch spent in solitary confinement have stayed with him, too.

His notes on the experience, which eventually became his opinion piece in The New York Times, “threw gasoline on the debate,” he says — a debate that had already begun to smolder in several states. After his essay was published, Raemisch found himself in the spotlight at a critical moment. Opportunities to speak out on reform multiplied, allowing him to bring international attention to his cause, and in the process, to earn some credibility.

He was called on to testify on Colorado’s reforms before a US Senate Judiciary Subcommittee on solitary confinement. With Gary Mohr, his counterpart in Ohio, he is leading efforts to develop new American Correctional Association standards, based on the reforms both men are making in their states. And recently, he joined a delegation to the United Nations that worked on rewriting the Minimum Rules for the Treatment of Prisoners. That revision, also known as the Mandela Rules, was adopted unanimously by the UN General Assembly last December.

Despite these achievements, Raemisch is not without detractors. But after years in the public eye, he’s learned to turn the other cheek when it comes to public criticism.

In January, the State of Colorado paid a $280,000 whistleblower settlement to a former Department of Corrections statistician who alleged the state’s numbers on prisoner reforms had been exaggerated. Raemisch stands by his department’s statistics — and always has, he says.

Others have accused Raemisch of using solitary confinement reform as a platform for self-promotion. To that he responds, “At 62, I’m looking down the mountain and wondering how I’m going to get the heck off it. What would be the point?”

Raemisch says he’s far more concerned with carrying out his responsibilities than with what his critics are saying. He also understands the political reality of cabinet appointments and admits to feeling some urgency to continue making progress on segregation reform, as well as working on Colorado’s high recidivism rate. His tenure as corrections chief will most likely end when Hickenlooper, halfway through his second term, moves out of the governor’s mansion.

“The average lifespan of someone in my position is 2.75 years,” Raemisch says. That’s a milestone he recently reached.

However his job comes to an end, he knows his future is back in Wisconsin, where he and his wife have maintained their family home.

Thinking about the transition, Raemisch turns contemplative. “This department is a much different place than when I found it, and it was a good place then. I like to think it’s better now,” he says. “It’s been a hell of a ride.”