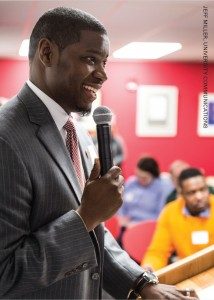 “I’m hoping that the collaborative presence we facilitate will lead to long-term impacts around college access, knowledge about UW-Madison, and helping the community resolve issues. This is a good start toward building that sort of equitable relationship in the community space. For all the resources the community provides for the university, this is a way for us to start listening and engaging. True partnership looks like giving them something they’ve been asking for.”
— Everett Mitchell ’10, University of Wisconsin News

On the motivation to become a lawyer despite facing blindness

“My grandfather was a lawyer; my father is a lawyer; and, vision or no vision, I was going to become a lawyer.”
Johnny Walsh ’09, Wisconsin State Journal 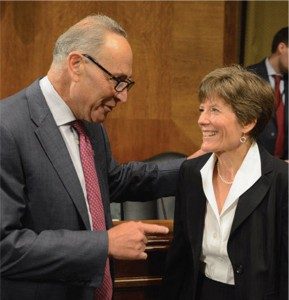 On confirming Brenda Sannes ’83 as federal judge in Syracuse

“Brenda has all of the attributes needed to be a fantastic federal judge — she is thorough, fair, and has a passionate commitment to an impartial application of the rule of law.”
US Senator Charles Schumer, Post Standard

“I miss Frank Remington, who always looked out for student athletes. Remington, a longtime law professor at the University of Wisconsin, set the standard for integrity in intercollegiate athletics. As chair of the NCAA’s infractions committee, he never played favorites. He was chair of that committee when it imposed the ‘death penalty’ on Southern Methodist University, forcing it to give up football for the 1987 season as a penalty for major infractions. He had one rule above all: honesty at all times from schools, athletes, and coaches.”
Ed Garvey ’69, Capital Times