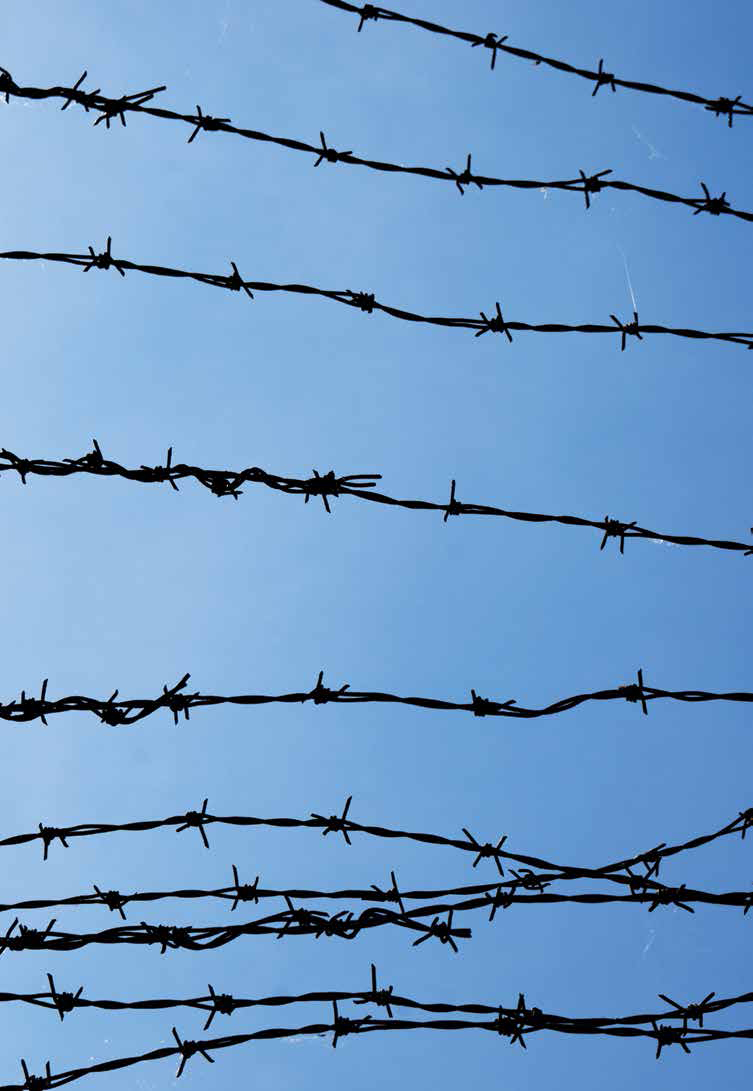 “Never in a thousand years would I have ever dreamed I’d be watching my mailbox for the next letter from Ryan Beckler.” — Noreen Deiss

To understand why Noreen Deiss would say this, one need only look back to the evening of December 4, 1994. That was when a sixteen-year-old Beckler, his fifteen-year-old girlfriend, and a twenty-two-year-old man named Arthur Foster drove to the home of Deiss’s parents in rural Ellsworth, Wisconsin, intending to rob them. After gaining entry with a story about car trouble, Foster shot Donald and Kathleen Deiss in the head with Beckler’s .22-caliber rifle. The trio then drove off with $600 in cash, leaving the couple to die. When Noreen Deiss arrived later that night, she found that her family home — the house where her mother had been born and where she herself had grown up, the house that had been in her family for ninety-eight years, and where she had recently helped decorate her parents’ Christmas tree — had become a crime scene.

The trauma of that night remains as present to Noreen Deiss today as it was nearly twenty years ago, haunting her in nightmares and visions. In a letter she wrote to Ryan Beckler in 2012, Deiss summed up the consequences of his actions for them both: “You went to prison, and so did I.”

That Deiss should now be engaged in regular correspondence with a man she once considered to be a monster — a man who was sentenced to fifty years in prison on two counts of felony murder, and who now intends to become a social worker in order to help others avoid his own mistakes — is the direct result of their mutual engagement with restorative justice. Restorative justice is a victim-centered philosophy that focuses on repairing the harm that crime does to individuals and communities.

There are many ways of practicing restorative justice, but perhaps none is more intense than the kind of victim-offender dialogue that brought Deiss and Beckler together last March. They met in a private room at the Oshkosh Correctional Institution, where Beckler is currently incarcerated. “It took me 6,670 days to get there,” Deiss says of the four-hour-long meeting, during which she and Beckler talked and wept. “It’s allowed me to live again.”

The criminal justice system, says Restorative Justice Program director Jonathan Scharrer, asks three questions: “What law was broken? Who broke that law? And how do we punish them?” The state uses an adversarial court system to seek retribution for the violation of specific codes or statutes, but the victims and survivors of the crimes committed often have little role to play in the process. For example, while Deiss was permitted to make a brief victim-impact statement in court, for the most part, she felt voiceless.

“When people get murdered, it’s a crime against the state, not a crime against the victim’s family,” she says. “In the courtroom, I was looked upon as a member of the community, and as a community member, I needed to keep my mouth shut so it didn’t interfere with the judicial process.”

She was given no opportunity to confront the defendants, to ask them questions, or to make them understand the impact of their actions on her family and on her parents’ community. Deiss’s family members must now come to grips with the murders of their loved ones, while Donald and Kathleen’s neighbors, who in the past never even thought to lock their doors, feel a twinge of fear whenever they hear a strange car pull up in the driveway.

Restorative justice, on the other hand, looks at crime as a violation of relationships. “What we”re asking instead is, who has been harmed?” says Scharrer. “How have they been harmed? And how do we repair that harm?”

Those questions can be asked in a variety of contexts. Some municipalities employ restorative justice circles that bring together victims, offenders, and community members to handle property crimes or reintegrate returning inmates into society, while some school districts use them to address issues such as teasing and bullying.

Scharrer, for example, cut his teeth in restorative justice facilitating circles in Milwaukee public schools when he was a student at Marquette University Law School, where former Wisconsin Supreme Court Justice Janine Geske runs a restorative justice clinic. Some prisons, meanwhile, host victim-impact panels that allow crime victims to share their experiences with inmates, helping offenders to understand how they have affected the lives of others and to develop empathy and a sense of accountability for what they’ve done.

Proponents of restorative justice contend that such encounters can prevent offenders from reoffending — a contention that is supported by a growing body of evidence from North America, Europe, and elsewhere that shows restorative justice programs drive down recidivism rates.

By intervening early in schools, or in diversion programs that keep offenders out of the criminal justice system in the first place, advocates argue that restorative justice can help head off more serious problems later on.

Scharrer is part of a pilot program in Dane County this fall that will refer offenders aged seventeen to twenty-five who have committed misdemeanors to a restorative justice program rather than to the district attorney’s office, keeping their records clean and perhaps preventing them from traveling down the road to prison.

Scharrer admits that restorative justice isn’t for everyone. But when it works, as it has for Deiss and Beckler, the results can be astonishing.

While incarcerated at Green Bay Correctional Institution, Beckler attended a victim-impact panel led by Geske. Hearing a rape victim describe her experiences sparked an emotional epiphany in Beckler, allowing him to connect the victim’s trauma to the pain he felt as a child after losing his father in a snowmobile accident — and also to the pain he later caused the Deiss family.

As a result of his shifting perspective, Beckler wrote a nine-page letter of apology to the Deiss family in 2010. The letter was deposited with the Wisconsin Department of Corrections’ Office of Victim Services and Programs (OVSP), but Noreen Deiss learned of its existence only in 2012, when she specifically asked an OVSP staffer if he”d ever received anything from Beckler.

The OVSP does not automatically notify victims about such letters in order to prevent them from being re-traumatized by unwanted contact from offenders. For the same reason, only a victim can initiate a victim-offender dialogue.

By then, Deiss had already met with Beckler’s former girlfriend for the purpose of encouraging her to lead a productive life. (She has since become a nurse.)

After reading Beckler’s letter and learning of his desire to help others and the progress he had made toward bettering himself in prison, she wanted to do the same for him. She also wanted to thank Beckler for calling the police to confess what he had done — “without him, it would’ve been an unsolved crime” — and to ask him the many questions she still had about his involvement in her parents’ murder.

“It’s a very intense process, and people come at it for different reasons,” says Scharrer. Some victims, for example, simply want the opportunity to look the offender in the eye, while others want answers to questions that never came up in court. For their part, offenders may want to apologize or take responsibility for the harm they’ve caused by answering victims’ questions.

As Deiss learned, the process takes time and doesn’t happen overnight. From the time Deiss decided to request a meeting, it took well over a year to meet with Beckler. “I had to practice patience,” Deiss says. This is not unusual: according to Scharrer, it can take as long as two years to prepare for a victim-offender dialogue.

First, the facilitators must assess the suitability of both the victim and the offender and determine their goals. (The process is completely voluntary for both parties because forcing an offender to participate could produce a meeting that wouldn’t be helpful to anyone.)

Next, they must act as facilitators and go-betweens for the participants, ferrying questions between them and exploring all possible answers in order to minimize the possibility of unsettling surprises.

They even walk the victims through everything that will happen on the day of the meeting, making sure that all of their concerns, including such seemingly trivial details as who will enter the room first, are addressed in advance. The goal is to anticipate the needs of the victim as fully as possible so that during the dialogue itself, the facilitators can fade into the background, and the victim and offender can engage in a free-flowing conversation.

Entering Oshkosh prison wasn’t easy for Deiss — “I could barely breathe,” she says — but once Beckler joined her, the other people in the room melted away. She didn’t even notice the woman taking notes at her side until she was handed twenty-five pages of transcribed dialogue — pages she slept with under her pillow for weeks afterward. The two answered one another’s questions. Deiss played Beckler a DVD containing photos of her parents that she”d made as a kind of therapy after their murder. Before they parted, she gave him a hug of forgiveness. “It was one of the best days of my past eighteen years,” she says.

Since then, Deiss and Beckler have continued to communicate by mail, comparing notes on the Bible and catching one another up on what they have been doing to help others. Deiss has been addressing groups of prison inmates through victim-impact panels and advocating for restorative justice at workshops, and Beckler has spoken to visiting groups of troubled teens. Both would like to meet again, and Beckler recently met with Deiss’s nephew Bill.

For Deiss, maintaining a relationship with Beckler gives her a way to support him as he seeks to help others. “I have a vested interest in his doing well out here, and preventing this kind of crime and pain from happening to other people,” she says. Her advocacy stems from the same source: speaking at a St. Croix Valley Restorative Justice Program workshop at Wisconsin Indian-head Technical College last March for a wide range of community members (lawyers, judges, educators, human services personnel, police, and corrections officers), Deiss argued that restorative justice offers a means of preventing young people from following Beckler’s trajectory. She lobbied her audience to help implement restorative justice in schools and social services programs.

“Each offender in every prison seems to share a common similarity; each one is there because something went wrong, really wrong in their lives as a child,” she told the workshop attendees. “I often wonder, if restorative justice programs existed in Ryan’s school when he was growing up, how would his life be different today? How would my life be looking tomorrow?”

By participating in victim-impact panels, Deiss also hopes to reach individual offenders in precisely the same way that a victim once reached Ryan Beckler. There is evidence that she is already succeeding: after speaking to offenders at the St. Croix Correctional Center in New Richmond, Deiss was thanked by eighty-seven inmates. Seeing their handwritten responses to her personal narrative — “I will always think of your story before I do something that could hurt others again”; “you have opened my eyes, and because of you, I am going to change” — has given her hope and more.

“It gives me purpose,” Deiss says. “And it gives some meaning to this whole, entire journey.”