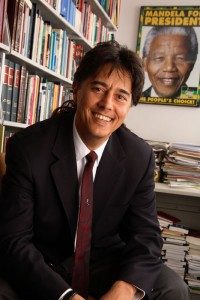 A native of Durban, South Africa, Professor Heinz Klug participated in the anti-apartheid struggle, spent eleven years in exile, and returned to South Africa in 1990 as a member of the African National Congress Land Commission. He reflects on the legacy of former South African President Nelson Mandela, who passed away in December.

As an anti-apartheid activist in the mid-1970s, I thought of Nelson Mandela as a faraway, imprisoned icon. Before going into exile in Botswana in 1979, I had only read a line or two of his most famous speeches and seen outdated photos on smuggled, poorly reproduced pamphlets. He was a distant figure, almost mythic — not a man we ever thought we would see in person, much less vote for as the country’s first democratically elected president.

When Mandela was released from prison in 1990, I was in Lusaka, Zambia, at the headquarters of the African National Congress (ANC). With millions around the world, we watched in anticipation until Mandela finally appeared on our small black-and-white TV, walking out of the prison gates with his fist held high, still asserting his militant rejection of apartheid.

Even as a young man, Mandela refused to accept the limits the world placed on him. Expelled from university for a student protest, he left his home village, found work in the gold mines, and studied to become a lawyer, eventually co-founding South Africa’s first black law firm. At the same time, he became a founding member of the ANC Youth League, which rejected the existing ANC policy of polite negotiations and called for active resistance to apartheid. In the
1950s, Mandela became volunteer-in-chief of the ANC’s defiance campaign against unjust laws, based on the passive resistance practices of Mahatma Gandhi.

When the government outlawed the ANC in 1960 and rejected Mandela’s call to hold a national convention addressing the issues that faced the nation, he turned to armed action as the only means left to force negotiations. He became the first commander-in-chief of Umkhonto we Sizwe, the ANC’s armed wing.

Arrested in 1962, Mandela told the court that sentenced him to life in prison, “I have fought against black domination. And I have fought against white domination. I have cherished the ideal of a democratic and free society in which all persons live together in harmony and with equal opportunities. It is an ideal which I hope to live for and to achieve. But, if needs be, it is an ideal for which I am prepared to die.”

Mandela’s unconditional release twenty-eight years later made it clear that apartheid’s time had come, yet it would take another four years before South Africa’s first democratic elections.

During that time, Mandela faced demands to abandon negotiations as the apartheid regime’s role in promoting violent conflict in black communities emerged, along with pressure to accept the regime’s demands for the recognition of group rights as an element of any new constitutional arrangement.

Even after breaking off negotiations, Mandela recognized that the military might of the regime meant that negotiations remained the only way to avoid civil war. When he re-opened negotiations with the regime, the ANC proposed a five-year transition, with a government of national unity that would ensure roles for former apartheid rulers and guarantees for apartheid civil servants.

Mandela continued to place principle before self when he stepped down in 1999. In the face of government inaction on the devastating HIV/AIDS crisis, he publicly acknowledged his own failure to respond to the epidemic while he was in office and called for a change in government policies on the disease.

Despite Mandela’s efforts, little progress has since been made in eradicating the structural conditions of apartheid.

Mandela left a great legacy in shepherding the creation of a constitutional democracy in South Africa. But the danger facing the nation now is that the political and economic classes that govern and shape global opinion on South Africa will fail to recognize that it is the perpetuation of gross inequalities that is the greatest threat to that legacy.