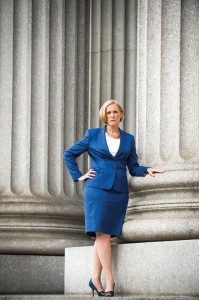 When Bridget Brennan ’83 began her academic journey at UW Law School, she had no intention of becoming a prosecutor. A journalist working in small television markets in Wisconsin, Brennan had a passion for telling stories. She came to law school to deepen her understanding of the American legal system, to become a better, more accurate reporter on court cases — and ultimately, to make it to a larger news market.

That was before Brennan studied under UW Law professors such as Frank Tuerkheimer, worked on the Legal Assistance for Institutionalized Persons project, interned at a local firm, and learned to love prosecution.

After graduation, she embarked on a legal career in New York City, where Tuerkheimer had nominated her for an assistant district attorney position. In 1993, she moved from the Manhattan DA’s office to New York City’s Office of the Special Narcotics Prosecutor, rising to the top job as special narcotics prosecutor in 1998. The office has faced an evolving urban drug scene: from the Vietnam-era heroin scourge, to the 1980s crack epidemic, to a twenty-first-century prescription-drug problem.

At UW Law School’s reunion days last September, Brennan met with current students to answer their questions about her chosen career path and her experiences as a high-profile prosecutor in New York.

Here are some excerpts from that conversation.

On choosing a career in prosecution:
Defense work is hard and admirable— I think it’s much harder than being a prosecutor, frankly — but it just wasn’t for me. What I like about criminal prosecution is that there’s more than one path to doing the right thing, and in New York, we’ve been able to pursue justice creatively. For example, during my first year in the DA’s office, New York police were charged in the death of a man in custody. Murder convictions were unlikely because the charges were incredibly hard to prove. So we came up with the theory of charging the officers not with murder but with criminally negligent homicide. We lost that case ultimately, but the theory has been used successfully in subsequent cases.

On her current position as special narcotics prosecutor:
I was a homicide prosecutor at the height of the crack epidemic in New York City, so I approach the drug problem from that perspective. I saw drugs ruining people’s lives. I could tell gory story by gory story — child abuse, rape, murder.

Being New York City’s special narcotics prosecutor has put me on the front end of the drug problem rather than the back end, turning off the spigot at the highest level by addressing the international narcotics trade. When I was a younger assistant DA, all I could impact was the case I was working on at the time. Handling individual cases is important, but now I’m setting policy with state and federal leaders.

But I also try to have an impact on the community of two hundred who work for me. It’s important to create a workplace that’s inspiring and engaging, and to treat people fairly so they’ll do their jobs well.

On interesting people she’s met through the  job:
I was John Kennedy, Jr.’s boss for a while, and I also met his mother. And because my office runs more narcotics wiretaps than anywhere else in the world, I’ve met quite a few presidents. That makes us interesting to television and movie crews, too. We actually had the creators of the Wire come to shadow us, and we were invited to the series premiere. I didn’t really like that show, though. I didn’t think it was authentic.

On the  qualities needed for  a career in criminal prosecution:
The most important quality is your judgment, because you’ll be making decisions that are critically important to people’s lives. When I was on hiring committees, I would look for candidates with common sense and an understanding of human nature. Academic experience is important, but without a breadth of life experiences — the kind you get waiting tables or working in fast food — it’s hard to evaluate people’s stories, to weigh the evidence in a criminal proceeding, or know when to press a witness. You can also develop those skills and demonstrate your interest and commitment by participating in legal clinics and looking for other ways to gain legal experience. So, four things: good judgment, life experiences, demonstration of real interest, and clinical participation.

On UW Law School:
I love UW Law. Terrific attorneys come out of this school, and it’s done great things by me. And I still get that thrill going up Bascom Hill.