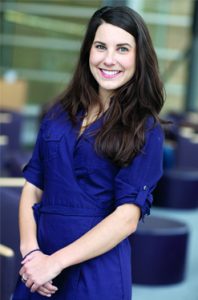 After working as a bilingual case manager for Spanish-speaking immigrants at the Milwaukee County Courthouse, Kathryn Finley decided to study law so she could advocate on behalf of Wisconsin’s immigrants.

Prior to pursuing the Baldwin grant, Finley and LLSA students were already conducting interviews with detainees at the Immigration and Customs Enforcement facility in Dodge County as part of their volunteer work. These visits assist the National Immigration Justice Center in Chicago with screening for potential clients, but students wanted to do more.

They learned that access to legal counsel—especially the high-quality services offered by pro bono attorneys, nonprofit organizations and law school clinics—most often determines the outcome of immigrant deportation cases. Finley cites a 2011 study that found 67 percent of immigrants with counsel prevailed in their cases, while only eight percent of those without counsel were successful.

Immigrant Justice Clinic Director Stacy Taeuber says that for many, deportation can be a punishment worse than incarceration.

Once in federal custody, immigrants in deportation proceedings have a right to assert a valid defense, but as Finley explains, many lack the resources, expertise, or even the language skills
to defend themselves.

“In Wisconsin, there are no free or even low-cost legal services for undocumented immigrants in deportation proceedings,” Finley says.

Now, thanks to the clinic, immigrants in the Wisconsin detention system will have improved access to legal representation. Under faculty supervision, clinic students perform all aspects of their clients’ representation over the course of two semesters, from the intake interviews to the final hearing in the Chicago Immigration Court. Students will also conduct twice-monthly “Know Your Rights” presentations to detainees at the Dodge Detention Facility in Juneau, Wisconsin.

Beyond providing free legal services to detainees, clinic students will reach out to immigrant communities at large. Through regularly scheduled “Know Your Rights” presentations at schools, churches, and other community groups, students hope to educate families about exercising their civil rights. They may also assist non-detained clients with claims to citizenship, seek protections for victims of violence, and offer counsel on other criminal issues or an array of other problems immigrants might face. As part of the clinic, students will attend a weekly seminar on immigration law.

“Wisconsin has seen a drastic rise in the number of arrests and deportations of immigrants due to increased collaboration between the Wisconsin criminal justice and federal immigration systems,” Finley says.

That rise reflects a national trend. Last year in the United States, nearly 400,000 people were deported as more states such as Wisconsin have begun working with Immigration and Customs Enforcement authorities.

For students and their clients, the Immigrant Justice Clinic alliance is a symbiotic one. As the clinic addresses a gap in services, students gain valuable skills in interviewing, client counseling, research, and writing and trial techniques.

“This clinic provides students with meaningful, hands-on exposure to the world of immigration,” Taeuber says.

Read an essay about the Immigrant Justice Clinic by Stacy Taeuber, clinic director.

Watch a video of Finley and other Immigrant Justice Clinic students discussing their work during the clinic’s first year.