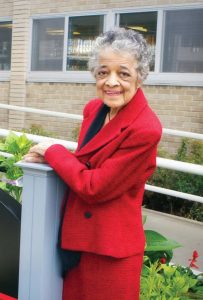 As the first woman and first African American to ascend to major political posts in Wisconsin, Vel Phillips’ career was full of firsts. The lifelong civil rights leader was the first Black woman to graduate from the UW Law School and she worked against racial discrimination in many roles throughout her career.

Now, the board in charge of decorating the State Capitol has agreed to create a subcommittee to explore a permanent tribute to Phillips. The inspiration to build a monument to Phillips stems from racial justice protests in 2020, during which two statues were torn down outside of the State Capitol. Advocates seek to build a monument to Phillips, celebrating her tremendous accomplishments and taking a first step toward more visible representation at the Capitol. If erected, it would be the first statue at the Capitol to honor a person of color. Tentative plans include placing the statue at the South Hamilton Street entrance to the Capitol.

Returning home to Milwaukee after her 1946 graduation from Howard University, she married the love of her life, (Warren) Dale Phillips, and joined him to attend the University of Wisconsin Law School. She earned her law degree in 1951.

“I was the first Black woman to graduate from the Law School,” Phillips recalled in Dream Big Dreams, a 2015 documentary about her life. “I just thought that was the biggest thing that could happen to me.”

As law students, the Phillipses were assigned to housing where neighboring students soon petitioned to bar future Black residents. The couple found another UW community that was more welcoming to them and their two sons, but she remained deeply affected by the experience. Inspired by advice from US Supreme Court Justice Thurgood Marshall to use her profession to make the world better, she would go on to win a historic fight for fair housing and social justice.

Elected in 1956 as the first woman and first African American on the Milwaukee Common Council, Phillips sponsored legislation to outlaw racial discrimination in city housing ordinances. Success took six years of political tumult and 200 days of marches and nonviolent community protests, but she was eventually recognized nationally for her leadership.

On campus, Phillips is honored at the UW–Madison Lakeshore Residence, now named Phillips Hall. A special tribute to Phillips is also located in the Wisconsin Alumni Association’s Alumni Park, which opened in 2017. A sculpture of a megaphone with the front page of the Milwaukee Sentinel commemorates Phillips’ arrest during a rally to support an open-housing ordinance in the city.