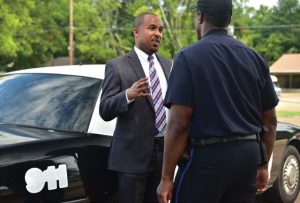 As a change-making district attorney in his home state of Mississippi, Scott Colom loves that he has the chance to use the law to achieve justice for all.

“Getting in the courtroom, advocating on people’s behalf, doing research, writing — I’m probably more in love with that part now than ever,” he says. “Particularly, what the law can do when it comes to impacting people’s lives in a positive direction.”

Colom won the 2020 Forward Under 40 award, given by the Wisconsin Alumni Association. UW graduates selected for the award, all under the age of 40, are honored for successfully leveraging their educations to better their cities, states, nations, and even the world.

Campaigning on a criminal justice reform platform, Colom was elected district attorney in 2015, with a historic win over a 26-year incumbent. His district includes some 200,000 people across four rural counties in eastern Mississippi. As in so many other regions of the country, people in his district struggle with addiction, and the community grapples with related crime.

But instead of jailing offenders for nonviolent or drug-related crimes, Colom argued, the community could achieve greater justice through treatment programs and alternative sentencing.

“We prioritize, and you can focus more on the serious, violent offenses — getting those processed through the system quicker,” Colom says. “People have more faith in the system. Plus, we’ll reduce the collateral consequences of sending people to prison.”

Upon election, Colom quickly invested in a pretrial diversion program, supervising people who break the law instead of sending them to jail. Social workers assess how best to rehabilitate offenders, such as helping them find jobs, earn a GED, or get access to drug or alcohol treatment.

“I put more people on that program in one year than my predecessor had put on there in eight years,” Colom says.

He’s partnering with the University of Mississippi to develop a conviction-integrity unit, which reviews past cases to ensure evidence was reliable. Colom’s team also closely reviews cases before they go to a grand jury — he wants only the strongest cases to go to trial. Simply put, Colom says, declining to press charges can keep innocent people out of prison.

Colom says his time at UW Law School, especially his clinic experience, strengthened his resolve to change the criminal justice system from within. After a brief time at his family’s law firm, he shifted to public service.

He was the youngest person and the first African American to be appointed in Lowndes County as an interim judge; he was later appointed a municipal court judge and a city prosecutor.

As district attorney, Colom says he loves being in the courtroom, as well as working with his staff and the community’s police force. But now in his third year in office, Colom is thinking outside the courthouse walls.

“What I’ve got to do is get out of the courtroom more and be more of an advocate for what I’m trying to accomplish,” he says.

To that end, Colom is cultivating networks and programs to support people who have already served their time. Mentoring for at-risk youth, or reentry services to help people adjust to life after they leave prison, can go a long way toward addressing the reasons people commit crimes in the first place, he says.

Colom believes his district can be healthier and safer if he listens to and learns from people who are at the greatest risk of becoming victims — and those whose lives have been irrevocably changed by inequities of criminal justice.

“We don’t think about the children of people who are incarcerated as victims — but they are,” Colom says. “How do we raise their voices? That actually will do more to deter crime than any sentence.”