Why were law students and engineering students rivals?

In 1915, students discovered that St. Patrick was also a lawyer and an engineer. Both law and engineering schools called dibs on the saint, and thus the rivalry began.

The rivalry first manifested in the form of snowball fights on Bascom Hill, though the students turned to pranks over time. In the 1930s, a snowless winter led to students pelting eggs instead of snow.

On one occasion, the law students stole “Oscar,” the engineers’ iron man. In retaliation, the engineers shut off the heat in the Law School building, chain-locked it, and hoisted a “St. Pat was an engineer” flag atop it.

Shortly after the commandeering of the Law School, a truce was called, thanks to the deans. They made it clear that barbed wire, tear gas, and rotten eggs were banned from pranks. The rivalry de-escalated into a St. Patrick’s Day basketball game, the last of which was held in 1966.

Did UW Law have a football team?

Our earliest records of a football team stem all the way back to 1894. While there isn’t much known about the team, rumor has it they battled other schools on campus. Similar UW Law intramural football teams have existed on and off, but in recent years, other sports, such as ultimate frisbee, have been more popular.

Who is the Law School’s Lost Generation?

The poor souls who had to endure displacement during the Law School’s 1990s construction are lovingly referred to as the Lost Generation. With classes being held across campus, this group didn’t have the centralized experience many UW Law grads enjoyed.

Marti Wronski, a ’97 graduate, remembers, “I was at UW Law during the years when the building was remodeled, so most of my classes met in the basement of the old Commerce Building (now Ingraham Hall). When we finally moved back into the law building my third year, I remember a light fixture crashing from the ceiling during finals week and shattering all over my exam. I literally brushed the glass away and kept writing.”

While the campuswide UW prom ended in 1959, the so-called Law School Prom is still alive and well today. Known more formally as Barristers Ball, sources suggest it dates back to at least the 1950s. This formal event, which was also called the Law Ball, is organized by the Student Bar Association.

A 1956 report described it: “Spring Fling was the most successful Law Ball in the school’s history. About 165 couples made the social hit go over in the usual big way and made a record profit of $199.77. Chairman Joe Kucirek thought the success was due to the new East Side Businessmen’s club. ‘The new dance floor adds respectability to the Ball and more people want to come,’ Kucirek said.”

What was the Reality Checkpoint?

While the origins are murky, the Law School once boasted a “Reality Checkpoint,” a tongue-in-cheek art installation, located on a stair landing that went nowhere.

Former Dean Dan Bernstine described it as such in an issue of The Gargoyle: “As many of you know, one of the most memorable landmarks in the Law School is ‘Reality Checkpoint’ which is a cement wall at the top of a blind staircase in the Library Wing. In fact, this spot has received both national and international note (see, Hayden, Social Courts in Theory and Practice: Yugoslav Workers’ Courts in Comparative Perspective, University of Pennsylvania Press, 1990). The photograph in this issue of The Gargoyle shows how we have given Reality Checkpoint a new, three-dimensional look. The steps have been carpeted and the area has been made into a place where students can socialize and otherwise contemplate the meaning of this architectural feat.”

An icon for the ages

How did the Gargoyle become UW Law’s mascot?

In 1963, when the existing Law School was demolished to make way for a new building, Law School Dean George Young found and rescued a sandstone gargoyle from the rubble. This figure and its departed sibling sat on the roof of the 1893 building for almost 70 years.

While one of the pair was believed to have perished in its fall, the second landed unscathed. Decades later, the departed gargoyle sibling was recovered and returned to the Law School by the family of an alumnus. The details of its disappearance remain a mystery.

That rescued gargoyle, which is now permanently installed in the Law School’s atrium, represents the indomitable strength and spirit of our Law School and its many graduates. Gargoyles originally appeared on French Gothic cathedrals. From the beginning, they had at least two purposes: many were made with open mouths that served as drains to divert rainwater away from the building’s foundation.

Whether they carried water or not, their second purpose was to scare away evil spirits. While gargoyles were often grotesque, stone carvers also honored friends and relatives by carving their faces on some gargoyles. Ours does not have a recognizable face, nor was it ever used to divert rainwater, but it clearly worked to keep away evil spirits — hence the good fortune of our school and its graduates.

When did the Cane Toss tradition begin?

There are many spectacles to watch during UW Homecoming Week, one of which doesn’t involve a marching band, a parade, or a football. It’s a longstanding tradition in which the UW Law School’s outgoing class marches (or runs, at full speed) across Camp Randall field to throw canes through the south end zone goalpost. Allegedly, those who toss their canes through the post and catch them on the other side will win their first case. Our sources are a little fuzzy on the date of the first cane toss, but signs point to November 3, 1917. That day, the Badgers beat Minnesota 10–7. Case closed.

How did Dean’s Cup get started?

Each fall since 1995, faculty, staff, and students at the UW schools of law and medicine have competed in a six-week series of competitions to raise money for local charities.

The idea for the Dean’s Cup started when several UW–Madison medical and law students were visiting a friend who was a law student at the University of Miami. During the 1995 spring break trip, the group learned about that university’s “Dean’s Cup” — an annual fall athletic competition between law and medical schools. 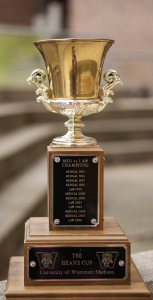 Tim Stewart ’97, and Tim Richer MD ’98, UW–Madison students at the time, brought back the idea of starting a similar event, and true to the spirit of UW–Madison, they suggested adding a charitable component.

Following a student survey, Stewart and Richer organized committees to plan athletic events, promotions, charity selection, and more for a competition in the fall semester. Students, faculty, staff, and alumni became energized, and donations from the Wisconsin Medical Alumni Association and the UW Law School Alumni allowed the schools to design and purchase the Dean’s Cup Trophy.