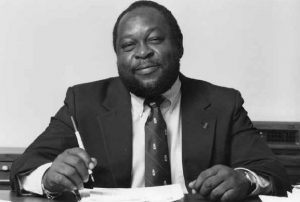 A leader in legal education, Bernstine served as dean of the school from 1990 to 1997, before going on to serve as the presi­dent of Portland State University. In 2007, he was appointed as president to the Law School Admission Council, and continued in that role until his death.

“This is a huge loss for American legal education,” Blake Morant, dean of George Washington University Law School and former president of the Association of American Law Schools, told Law.com. “This is a person who has been a vanguard of legal education for many years.”

His early career included stints as a pro­fessor of law and interim dean at Howard University in
Washington, DC, and as a staff attorney for the US Department of Labor.

Bernstine was awarded the Michael P. Malone International Leadership Award in recognition of his work in internationaliza­tion in higher education, and was a recipi­ent of the International Citizen Award by the Oregon Consular Corps. He received numerous honorary degrees from universi­ties internationally, including the Russian Federation, Japan, Korea, and Peru. He coauthored legal textbooks and contributed articles to journals, among them Wisconsin Environmental Law Journal, The Bar Ex­aminer, Wisconsin Law Review, Black Law Journal, and Villanova Law Review.

“Dan was a remarkable man on many levels. As a professional, he was a strong leader, but he encouraged those around him to think creatively and to develop new ini­tiatives,” says UW Law professor emeritus Charles Irish. “He had an exceptional abili­ty in working with people that enabled him to take on and accomplish difficult tasks with disarming ease, which I suspect is why he was so well regarded at UW, Portland State University, and the Law School Ad­mission Council, and why his death leaves a large void for so many of us.”