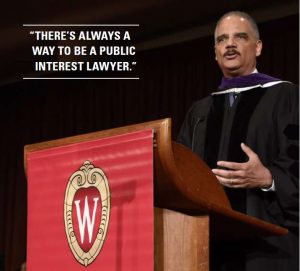 Former US Attorney General Eric Holder Jr. told an audience of UW Law School graduates in May, “As of today, you are no longer merely students of law. You are now stewards of our justice system.”

Holder spoke at this year’s hooding ceremony at the Monona Terrace Community and Convention Center in Madison.

In his address, Holder called UW Law a place that “produces consequential people. From Bob La Follette to Tammy Baldwin, from Tommy Thompson to Vel Phillips, from Jim Sensenbrenner to Gaylord Nelson: people who considered things outside of themselves; people who thought, and think, about the common good; people who have made a difference; people you must emulate.”

UW Law students have a duty and are the nation’s “surest hope” to serve the cause of justice, Holder said. He spoke of hard-fought strides toward equality and opportunity for all and insisted that more must be done. Specifically, he addressed the need to ensure the right to vote, “that most basic and important of uniquely American rights.” As attorney general, Holder prioritized enforcement of the Voting Rights Act of 1965.

Appointed by President Barack Obama, Holder was the third-longest- serving attorney general in US history and the first African American to hold that office. After leaving the Justice Department, he returned as partner at Covington & Burling, where he had worked for eight years prior to holding his federal post.

Even when graduates go on to work in industry or private practice, he said, “there’s always a way to be a public interest lawyer.”