In June, the United States Supreme Court ruled for the plaintiff in Kingsley v. Hendrickson, a case involving excessive use of force on pretrial detainees.

Wendy Ward, a 2001 UW Law School graduate, argued on behalf of plaintiff Michael Kingsley. He alleged that prison guards had used excessive force against him in violation of his federal civil rights during an incident at the Monroe County Jail in Wisconsin.

Ward, a partner with the Madison office of Merchant and Gould, says her firm took the case on a pro bono basis after a district court jury sided with the guards.

“We believed that the 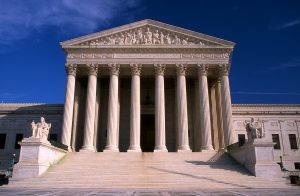 jury instructions were improper because they allowed the jurors to consider the subjective intent of the officers,” she said. “We appealed but lost again in a close case, with one judge dissenting. After consultation, we decided to try and interest the Supreme Court in the case because the various circuit courts of appeal were split on this issue.”

Kingsley’s case involved the due-process rights of people who have been arrested but not yet tried. In a 5–4 decision, the court concluded that excessive force in pretrial cases is measured by a different standard than in cases involving convicts. The ruling has implications for jail and police practices throughout the country.

“Arguing before the US Supreme Court and achieving a successful outcome is certainly the highlight of my career to date,” she says.