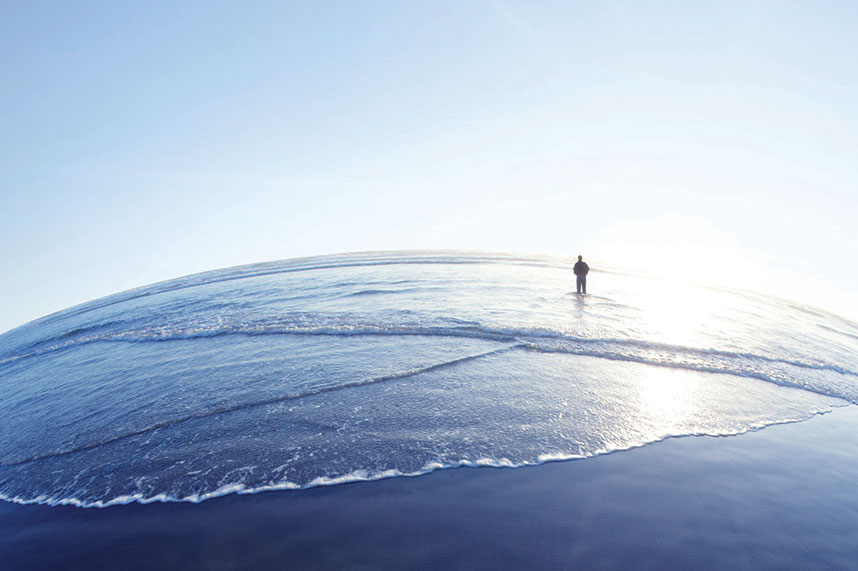 Have you ever wondered what you would do if the country you were living in disappeared completely?

Probably not. To most of us, it sounds like something from a science-fiction movie. Unfortunately, for those who are living on small island nations, this is far from science-fiction material— it is the future they are facing. What will happen to these people? Where will they go? What legal rights do they have?

These are the issues being examined in my seminar class Climate Change, Human Rights, and the Environment. While the situation is pretty grim and class discussions are often sobering, I feel that it is necessary to educate the students so they can start a discussion among themselves and be motivated to address the issue in a meaningful way.

Climate change is having an unprecedented impact globally, and perhaps most at risk are island nations. Small island states are home to 5 percent of the world’s population and account for fifty-two states. While nobody can say for sure exactly when these countries will disappear, it is expected that these islands will become uninhabitable long before they become totally submerged, due to lack of drinking water, increased storms, and increased salinity.

For those who are living on small island states, adapting to climate change will mean finding another country to live in that will provide them with basic rights that a state would normally provide for its citizens. However, these people do not have a right to receive these basic amenities and rights because they are not citizens of the receiving state — assuming, of course, there will be a receiving state.

Apart from the human catastrophe in the making, the disappearance of states raises many legal issues. What happens to the legal status of these sovereign nations — can they exist without territory? What happens to their maritime zones and associated resources, such as territorial sea and exclusive economic zones? What happens to the nationality of their people? Who will issue their legal documents such as birth certificates and passports?

The only solution left for these people would be to migrate en masse, but the question is where? Under current international law, these people will not be considered refugees— nor would they want to be categorized as such, and rightly so. They have to leave behind everything that they worked hard for — their livelihoods, their ancestral lands, and heritage — and labeling them as refugees just adds insult to injury.

Relocating entire populations will give rise to another set of legal issues, even if we succeed in finding physical land on which to relocate these populations. Will the state providing territory be willing to accept another sovereign nation coexisting within its territory? Or would one of the conditions of providing land be to grant its nationality or a lesser status to the migrant population?

Will the migrant population be willing to give up its nationality and lose its ethnic identity? What about the right to vote and participate in governance?

To advocate at the international level, these states formed into a coalition called the Alliance of Small Island States. The irony is that these countries and people are being affected by something that they contributed very little to, raising ethical and equity issues as well.

Despite considerable dillydallying in the United Nations, the recent appointment of an independent expert on human rights and the environment is a positive development. I have been invited to participate in some of the meetings convened by this independent expert to discuss his mandate.

The recently concluded UN Conference on Climate Change in Warsaw, Poland, made headlines when conference delegates woke up to news of the devastation cause by Typhoon Haiyan hitting the Philippines. It was considered to be the strongest storm ever to have made landfall. The Philippines’ delegate to the conference, Naderev Sano, called the climate crisis a madness: “We can stop this madness, right here in Warsaw.” In solidarity with his countrymen, Sano commenced a voluntary hunger strike, and thousands around the world joined him.

While the UN called the conference a success, environmental organizations, labor unions, and many others walked out of the talks to protest the slow speed and lack of ambition of the negotiations. They argued that the world’s poorest cannot wait and were tired of the excuses made by the rich countries.

Industrialized nations managed, yet again, to sidestep the issue of liability for the impacts of climate change. Not all was lost, however: a mechanism was established to deal with loss and damage resulting from climate change, including extreme weather events and slow-onset events, and funds were pledged to incentivize developing countries to keep their forest cover as a carbon sink.

There’s no time to waste: people are facing relocation due to climate change right now. Kivalina, a tiny village of four hundred inhabitants in Alaska, is facing relocation. The Army Corps of Engineers has determined that the village is no longer habitable due to increased storms associated with climate change, and residents will have to be relocated at a cost of $120-250 million. However, it is not clear who should pay for the relocation, and so far, a suitable location has not been found. The lawsuit filed by Kivalina against twenty oil, coal, and electric utility companies was not successful.

Climate change raises more legal questions than answers at this point. It is my hope that by learning about these legal issues and the urgency of the problem, my students will be better equipped to address them. After all, they are the future decision-makers who, at the same time, will have to bear the brunt of our actions (or in this case, inaction) today.

Sumudu Atapattu is the associate director of the Global Legal Studies Center, a joint initiative of the UW Law School and the Division of International Studies. She also coordinates the recently established Human Rights Program, a campus-wide project encompassing four research clusters. She is the lead counsel for human rights at the Center for International Sustainable Development Law in Montreal, a research organization working to promote international sustainable development law. She is currently involved in two book projects: International Environmental Law and the Global South (with Raz- zaque, J., González, C., and Alam, S., Cambridge University Press, forthcoming 2014) and Human Rights Approaches to Climate Change: Challenges for International Law (Routledge, forthcoming, 2015). She plans to write a grant proposal to continue the work on climate migration in the context of access to resources by those who are forced to migrate as a result of climate change, with particular emphasis on women.